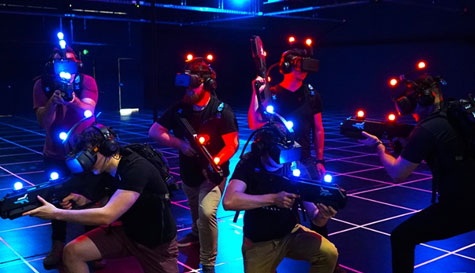 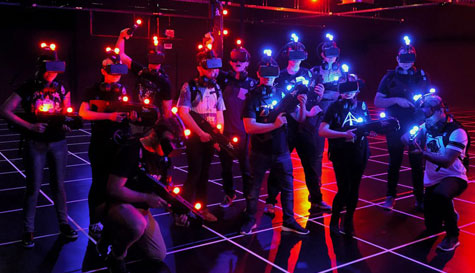 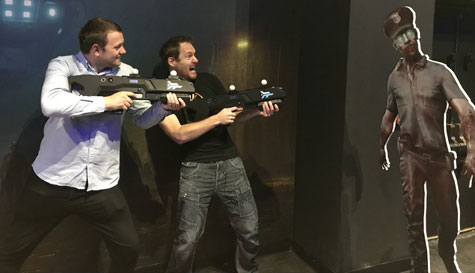 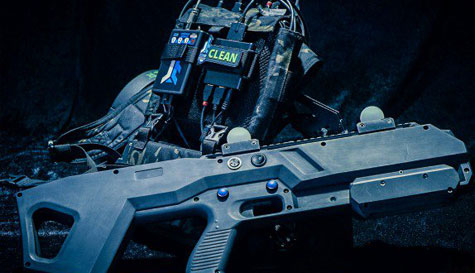 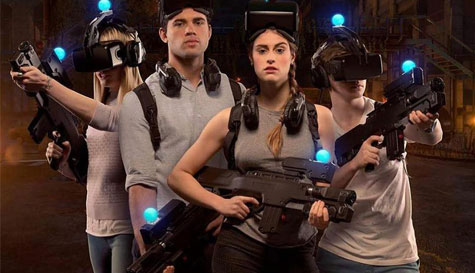 After all that amazing action what you need is a hearty meal. How about Burgers and Boobs? Read more…

More About Stag Do VR arcade

Do you ever feel that actual reality just doesn't live up to expectation? Where are the zombies? Why can't you run around with semi-automatic weapons? And wouldn't it be fun, just everyone once in a while, to shoot your mates?

What you need is free roam virtual reality!

You and the stags will be able to get fully immersed in adrenaline pumping virtual worlds where you'll have to work as a team in co-op adventures. The free roam action takes place in large rooms so there's less chance of bumping into each other during a game where your body is the controller and it really does feel like you're living the action.

You'll be given state-of-the-art headsets as well as reactive weapons which will give you a physical connection with the action.

The zombie apocalypse has finally happened (big fat "told you so"!) and your team is trapped in a bunkered fort. Help is on the way but until it arrives you must defend the fort from wave after wave of the undead horde. You'll have a selection of weapons pump-action shotgun, sniper rifle, heavy assault rifle and mini-gun. You'll also need to repair barriers between attacks or risk being overrun and becoming zombie sushi.

Enter an alien world where gravity doesn't function as expected. See flying whales, parrot rays and uncover a world full of strange puzzles and logic twisting challenges for you and your team to unravel. After last nights fun just how will the guys adapt to a world that really does push reality to the limit?

A secret military space station has gone dark and it's up to you and your team to go in, identify and fix the problem. Along the way you'll face robot infantry, killer drones, heavy calibre gun turrets, booby traps and all kinds of other nasty surprises. And remember, in space no one can hear you scream.

Each game can accommodate a maximum of 8 players so larger groups will be split into teams and teams can then battle it out to record the highest score. You can set your own forfeits for the losing team.

"Would love to return."

"Very enjoyable, very much appreciated and great experience. Would love to return."

We work with 1000s of suppliers across the UK & Europe so prices, availability, photos and specifics on our VR arcade activity may vary depending on your preferred location and dates.