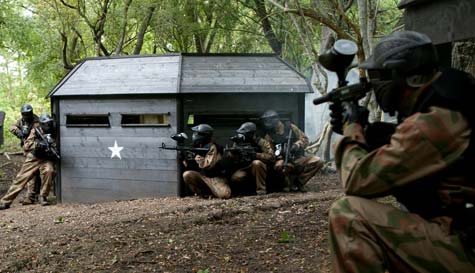 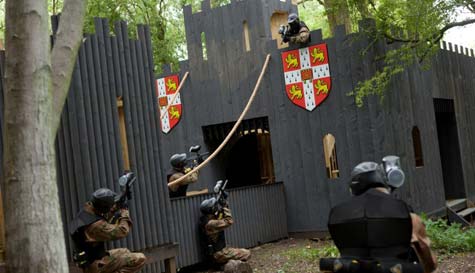 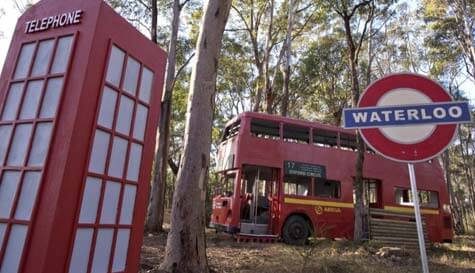 No. Come rain or shine, you can shoot.

It's not rocket science at our Sheffield stag party paintball centre. We know that all the lads need to have an epic day out with some pinpoint accurate paintball guns and acres of dense woodlands in which they get to run around in pretending they're Rambo or Lone Wolf McQuade as they dart between trees, shooting from the hip and reeling off 80s action movie one liners.

Of course, that doesn't mean that our Sheffield stag party paintball centre isn't a little different from your ordinary day of paintballing. With several specially designed battle arenas that add a twist to the usual formula of military themed missions and settings, we've got a paintball course like no other:

London - Snipe your enemies down from the top deck of an iconic London bus or poke around the corner of a red telephone box in this epic metropolitan free for all.
Creepy Church - With gravestones and caskets for cover, make a daring assault against a two-story church.
Sheriff's Castle - Storm the sheriff's castle, complete with turrets, drawbridge and impenetrable walls.

Give the groom a particularly hard time by kitting him up in a specially selected costume - we'd suggest a hi-viz jacket or a pink onesie - and sending him out into the battlefield with no chance of coming back intact.

Top Stag Prank - Why not give the groom a particularly hard time by kitting him up in a specially selected costume - we'd suggest a hi-viz jacket or a pink onesie. It's purely to make sure "mummy's little soldier" doesn't get lost, not to make him easier to hit of course. Read more Stag Pranks here...

Book It!
Need more inspiration? Search all our stag do activities...
Enquire About paintballing Now!