Find out your Wrestler Name…

If you were a child of the 80's or 90's there's a good chance that at some point you and your friends threw sofa cushions onto the floor, tied something around your heads and then leapt from the highest point you could find to execute your signature flying move which would result in pinning your masked opponent to the floor (although in reality you'd miss and either break a picture frame, a tooth or occasionally your opponent).

For 10 year olds across the nation wrestling was cool. Clothes lining younger brothers and sisters was just part of your WWE training, the bruised and battered sibling then crying and running to your mum and a night spent in your room or waiting until your father got home was all just getting in the way of your climb to the top and wrestling superstardom.

We've wrestled up the top 10 ring leaders below!

Wearing a kilt and played into the ring by bagpipes rather than rock music Rowdy made a great play of his Glasgow roots and Scottish "rage" but is actually Canadian. One of WWE's original bad boys he was always considered the villain and had a long running feud with… well pretty much everyone.
"Hot Rod" was there from the very beginning of WWE and featured in the very first Wrestlemania along with the first crop of stars who made wrestling the big business it is today.

Another Canadian Bret styled himself as the "The Best There Is, The Best There Was and The Best There Ever Will Be" and "The Excellence of Execution" he famously beat Ric Flair to the WWE Championship in 1992 and had an ongoing feud with the British Bulldogs.
Putting aside the dodgy pink leotard and wet-look mullet Bret Hart is hugely respected within the sport. He retired from wrestling after a concussion in 1999 but many pro-wrestlers still consider him to have been the best technical fighter of all time.

With 13 World Championships to his credit Hunter Hearst Helmsley aka "The King of Kings" was the first "heel" (villain) to win at Wrestlemania. He's certainly been around a while and has fought and had feuds with most of wrestling royalty including Ric Flair, The Rock, Steve Austin, etc. He was also co-founder of D-Generation X.

With the kind of dress sense that made funk star George Clinton look under-dressed Randy made his first Wrestlemania appearance at Wrestlemania II. Managed and often escorted to the ring by his wife/manager Elizabeth "The First Lady of Wrestling" he was Hulk Hogan's tag team partner for years until they had a feud ("feuds" are the staple diet of die hard wrestling fans. That and burgers). This lead to a showdown in Wrestlemania V which Hogan won.
However it is his clothes he will mostly be remembered for, his dress sense was about as "macho" as The Village People (although we clearly wouldn't say that to his face).

Dwayne Johnson has gone on to become an even bigger star out of the ring The Rock (aka The People's Champion) has gone from wrestling tough guy to movie hard man. Admittedly not the biggest leap but having honed his performing craft around the ring he is now box office gold to match the many titles he won in the ring.

A six time tag team titleholder alongside Jake "The Snake" Roberts, the undertaker feuded with Hulk Hogan at the height of both their powers. "The Deadman" styled himself on an undertaker from the wild west but it is his 21-0 undefeated winning streak at Wrestlemania which puts him in wrestling's elite.
He often carried an urn into the ring but never made any tea.

With hair and dressing gowns that would make Liberace jealous Ric "The Nature Boy" Flair was another fighter that never felt being macho was all it was cracked up to be. As wrestling stars go he was a tiny 6'1" however his persona eclipsed most of his contemporaries.
With a playboy like attitude he styled himself as a ladies man, drinking champagne, taking private jets and always giving a little extra to his female fans.
He had been told by doctors he would never wrestle again after breaking his neck in three places but he went on to win 16 world titles.

Another fighter to have suffered injury, Stone Cold suffered a fractured neck from a piledriver during a championship bout. His image of blue-collar warrior went down well with the wrestling fans and they were happy to cheer for this villain, unless he was squaring up to the likes of The Rock or Bret Hart.
He fell out with his manager "The Chairman" in a very public spat inside the ring which brought Mr McMahon back into the fighting arena.

Hulkamania really was the birth of stadium sized wrestling. Hogan's larger than life personality took what happened inside the ring and made it rock 'n' roll. The Hulk really was the sport's first superstar and his persona laid the blueprint that every major star in the sport has emulated since.
To many he will always be the daddy of WWE and has fought every big name in his career including Mr T and Kermit the Frog.

Born in a small French farming village "The Eighth Wonder of the World" was in every respect one of he biggest wrestling stars of all time. He had a 15 year winning streak where he crushed every opponent including the legendary Hulk Hogan (they had formerly been allies) until it was Hogan who eventually brought his run to an end in Wrestlemania III.
At one point he was even offered a football contract by Washington Redskins which he turned down. He was the first wrestler to be inducted into the WWE Hall of Fame.

If you want to put an end to smack talk and try a smackdown on your stag party you can learn to wrestle from a professional king of the ring. You'll learn safety, moves, strikes and can end your session with either a big tag match or a Royal Rumble. Make all your boyhood wrestling dreams come true and also decide once and for all who's a heavyweight champ and who's a lightweight llama. Read more here. 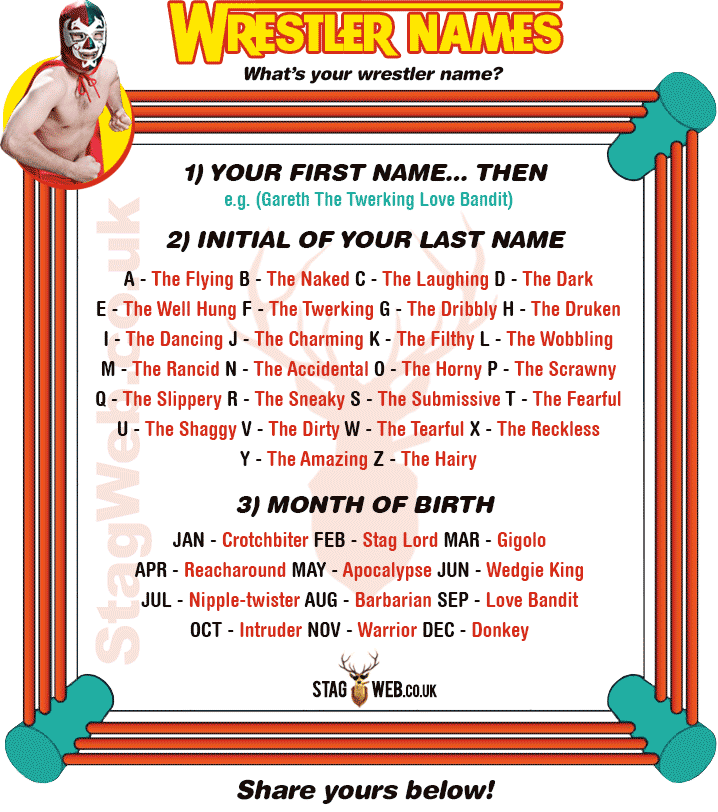