16 Things You’ll Regret in the Morning 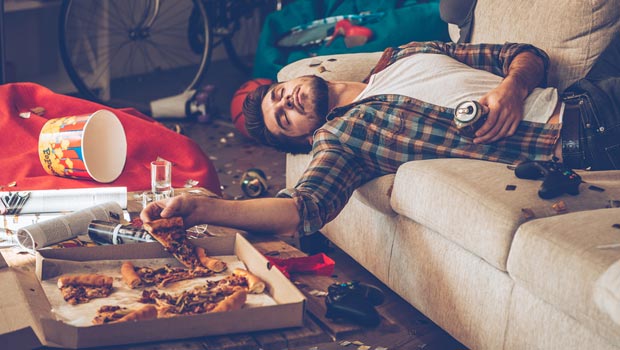 We’ve all done it: woken up and rather than the sound of bluebirds and smell of smoky bacon, what we’ve actually woken up to is some stranger’s elbow in our eye socket and a horrible feeling that last night something very, very bad happened. Here’s a quick reminder that no matter what you think you may have done last night, it could be (and often will get) worse.

Waking up in a hedge

You’re going to wake up stiff, sore and quite possibly smelling of whatever that s**t was they used to fertilise their garden.
Turns out it actually was s**t. And that’s why you shouldn’t sleep in hedges, kids.

Waking up in a stranger’s bed

You can’t remember who she is or going back to her place, all you know is she’s in the bathroom and she’ll be out in a minute. It’s a tense wait as you have no idea what she looks like…
So, what are the worst-case scenarios?

Waking up in your own bed

So you managed to get drunk and not pull yet again, congratulations, this has to be some kind of personal best for the number of weeks/months you didn’t end up in a gorgeous stranger’s bed.
Perhaps you should give that Nigel fella a ring?

It seemed like such a good idea at 3 o’clock in the morning and the perfect way to beat all comers in a sporting contest. However, the side effects appear to be that you can’t feel your mouth or, in fact, most of your face. And you don’t even want to consider the damage this has done to your bathroom. Worst of all, you don’t even know if you won.

Oh god, who did I call and what did I say? It’s that moment of sheer panic. If you called a family member, it can be fixed. If it was an ex, it could get messy…
Who was it? Who was it?
Oh, s**t… it was that absolute stunner who also happens to be… your boss?!

Why? Why, why, why? Surely you should know by now that as soon as you’ve had too much to drink, it’s time to put the phone safely out of reach. Or, better yet, bury it. Or throw it in the sea. Anything to prevent you from sending the kind of text you’ve just seen in your phone.

After so many years of loyal custom, you’d think the staff at the Sizzler would have stopped you. Or at the very least not asked everyone if they wanted chips with it!

There isn’t actually a ‘long way’, so why did you insist on trying to cut through fields, over buildings and through that lake… Hang on… there isn’t a lake, just the sewage works… oh crap! Literally.

Promising to make up the numbers

The chirpy, I-switched-to-coke-after-my-second-pint, knocking at your front door is a reminder that you promised to make up the numbers for Steve’s Sunday league team. Worse still, you managed to convince him you once had trials for Arsenal and he’s so desperate for his team to get a result he’s not going to go away until you answer the door, boots in hand.

Saying: “Hold my beer and watch this!” Especially if you wake up in A&E.

Never knowing when enough is enough

You could have called it a night before things got messy. You’d be bright and early right now. You could be out jogging, down the gym, cracking on with that project you keep putting off. Instead, you’re going to waste the day on the sofa re-watching Breaking Bad, eating toast and trying to piece together what happened last night.

Thinking the very hot, very angry policewoman was a stripper

In fact, it wasn’t so much feeling lucky, more cocky. Heading to the casino and putting all your cash on Black was kind of stupid. Especially as the sexy croupier you wanted to impress, wasn’t even remotely impressed. But even more so, because you blew your taxi money and had a 5-mile walk home. In the rain.

One minute you’re down the Frisky Badger with the lads and the next thing you know you’re on the edge of the Kalahari Desert being shouted at in French by a man who looks like the love child of Chuck Norris and Carlos Tevez. But with worse teeth.
What happened during those missing 15 pints and how did you make it out the country with only your Network Railcard for ID?

It’s never the 11 you had before that. It’s always the last one you end up regretting and blaming for worst of the damage when, in actual fact, the worst of the damage can be directly attributed to your usual poor decision making.
Oh well, at least you can look forward to doing it all again next weekend!