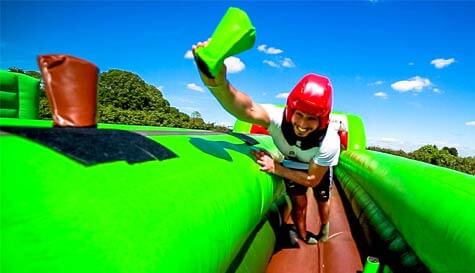 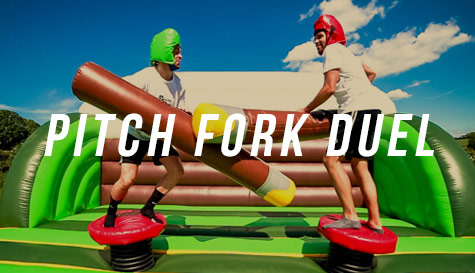 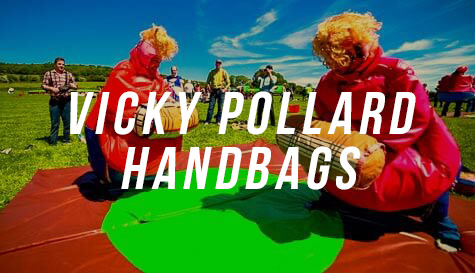 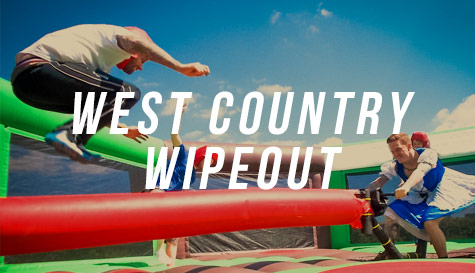 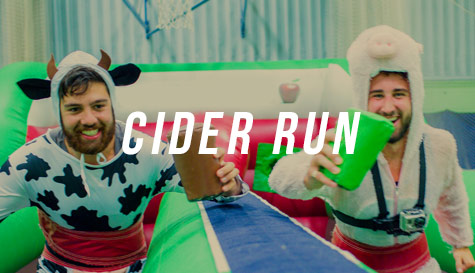 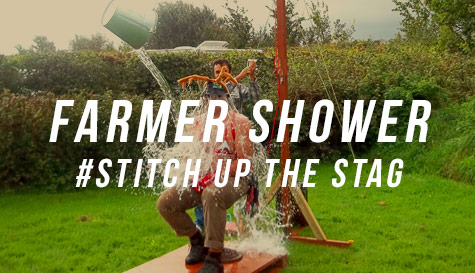 All year round. Indoor venue between Nov-Feb

"Olroight, moy luvverrrrr." Welcome to the West Country and the maddest sporting event since John Terry challenged the Lithuanian netball team to a game of naked paintball.

Imagine if The Wurzels were to organise the Olympic Games, purely for athletes who don't train but stick to a strict regime of pies and family packs of crisps. And rather than illegal substances, the competitors were being fuelled by Somerset's finest scrumpy cider...

Welcome to the Somerset Challenge! It's going to get messy.

Please note: From November to February, the event runs indoors… but it's still messy!

CIDER RUN CHALLENGE: A glass of cider is placed at one end of an inflatable run, all you need to do is reach it first. The only problem is you're attached to the start by a bungee rope.

PITCHFORK DUEL: You and your competitor will battle it out against one another using inflatable pitchforks to topple the other from their podium!

WURZEL KNOCKOUT: Armed to the teeth with cider apples and a huge catapult, you need to take out the target in the fewest number of shots.

VICKY POLLARD HANDBAGS: "Yeah but, no but, yeah!" Get your Burberry handbags at the ready to wallop your opposing chavvy mate while dressed in big comedy suits.

WELLY WANGING: Sharpshooting farmer-style. Take out the targets with a well-aimed welly.

DRUNK PUB SKITTLES: This is real West Country pub skittles on a grand scale, and it's another chance to give your opponents some earache. Easy when you're not dizzy drunk, but try spinning around a pole first!

FARMER SHOWER: Strap the groom into the "Tractor Seat of Truth," then the lads will fire a series of questions at him! If his answers don't meet your approval then no amount of product will save his precious hair from the bucket of dirty ditchwater balancing above his head.

Trustpilot
"We had a great time!"

"Very funny games, we had a great time there! The weather was really good too, which helped a lot."

"Very friendly instructors, really fun activity that didn't require too much effort after the night before!"

"Everything about West Country Games was perfect. Absolutely brilliant activity for a mixed group of ages. Would definitely recommend and go again!"

"The instructors were great and in the heat even offered around sun-cream and drinks, to keep everyone safe and hydrated!"

"The instructor really made the activity, she was brilliant!"

Gareth Harlow | Bristol
"So much fun"

"The challenges were so much fun, the Instructor was fantastic, even in the sh*te weather, she lifted up the spirits, and got everyone having a laugh!"

"Excellent afternoon out, have already recommended to friends. Everyone enjoyed themselves."

"Had a good laugh! Instructor was good fun too"

Ben Childs | Bristol
"Best part of the stag do"

"Best part of the stag do. Shame about the weather, but they still made us laugh the whole time there."

Please Note: We work with 1000s of suppliers across the UK & Europe so prices, availability, photos and specifics on our somerset challenge activity may vary depending on your preferred location and dates.