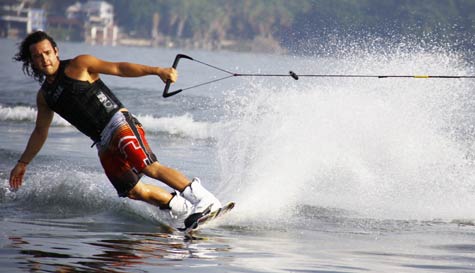 Make sure the groom stands out by giving him pink armbands to wear for the whole day.

More About Stag Do cable skiing

What is Cable Skiing?

It's just like water skiing but instead of a being pulled behind a boat you're pulled along by an overhead cable.

The speed can be moderated to make it easier to maintain the correct momentum. There's also no wake to overcome as nothing will be on the water ahead of you.

Does it still look cool?

Hell yeah! There are very few moments in life you'll look as cool as you will when water-skiing. It's one of the coolest looking sports on the planet!

Is there a chance we won't look cool?

Yes, it's a 50/50 possibility. Get it right and you'll be upright and cruising over the waves looking like a legend. Get it wrong and you'll be dragged through the water face first while the rest of the stags laugh at your misfortune and race to get the footage onto YouTube as quickly as possible (x10 if it happens to the groom).
If you really want to look cool there are jumps on the water you can launch yourself off. But we really wouldn't advise it, just try and stand up and get around the course in one piece.

Boats are expensive, noisy and they use petrol. Cables are easier to control, they don't create a wake and have less long term impact on the environment. Also, they're not as noisy so you can hear the groom's screams as he bounces around the course like a water-borne ballet dancing hippo. The cable is 1,000 meters long giving you plenty of time to get upright and looking good.

Wetsuits are available in the colder months.

We work with 1000s of suppliers across the UK & Europe so prices, availability, photos and specifics on our cable skiing activity may vary depending on your preferred location and dates.

Big laughs and big water while enjoying the sunshine.