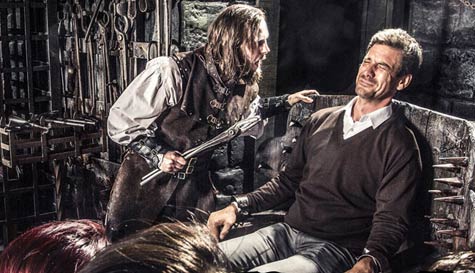 Make it up to the groom with a Strip Dinner. Read more...

We work with 1000s of suppliers across the UK & Europe so prices, availability, photos and specifics on our dungeon tour activity may vary depending on your preferred location and dates.

Get Ready For dungeon tour in Berlin...

Yep, it's time to give the groom a walk on the dark side as Perkeo the black jester takes you on a tour through 800 years of Berlin's most twisted stories guided by the freaky characters who left their mark.

During the tour, you'll meet the hilarious characters, face the river raft, the Labyrinth of the Lost and also find yourselves hurtling down the Elevator of Doom. But best of all, the groom will have to face either the judge's court or the hideous torturer. Either way, it's time he paid for his crimes against fashion, humour and leaving your mates behind.

The Twisted Monk - He'll welcome you into the library at Grey Abbey and tell you tales of the black death, Germanic tribes and the Inquisition as some pretty freaky stuff happens all around you. You probably think you're pretty cool under pressure. This room will prove you wrong.

Plague Street - 1576, the black death has Berlin in its grip, dead bodies are piled up as you pass through, lead by the doctor, who just can't wait to show you what the plague really looks like.

The Torturer - Are you sitting comfortably? Not if you're the groom you're not. He's just been tied to a chair as the torturer shows him the hook, tongue, pear and worst of all, the 'chappy chopper'.

The Court - He might have already confessed but we think he deserves a second chance. That's why the groom should now stand trial for his crimes. The comedy/insane judge will hear his pleas, or completely ignore them and sentence him anyway.