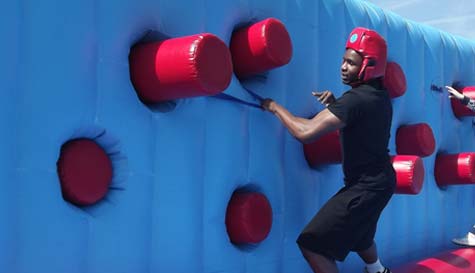 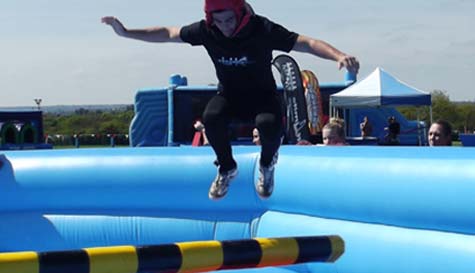 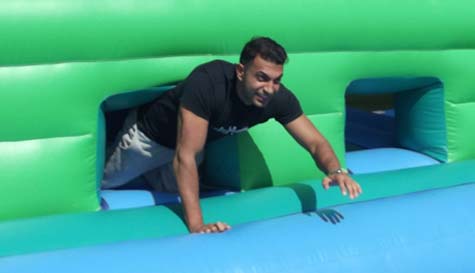 Watch our Totally Wiped Out Video
Don't risk missing out - send us your enquiry today!

Totally Wiped Out in Birmingham

We've taken some of the best elements of shows like Total Wipeout, It's a Knockout and Ninja Warrior, inflated them, covered them in foam, bounced up and down on them for a while and then rolled them out for one of the greatest super-sized stag events ever!

This is non-stop hilarious sporting fun where you'll be battling against other stag and hen parties (some of them in fancy dress) over 6 giant inflatable games. And let's get one thing straight, it's not about the taking part, it really is all about the winning!

Big Red Balls - No, we're not discussing one of the stag's gentlemen's vegetables, this is a race to get across the top of a line of giant balls without landing face-first in a heap.

Tricky Trunks - Shimmy across the top of the giant tubes dodging hanging obstacles in a head to head race with the other teams.

Drop & Drift - One inflatable foam slide, one group of heavyweight stags. The object is simple, who can slide the furthest. Like giant hungover curling stones.

Obnoxious Obstacles - Forget every preconceived idea you might have of obstacles courses, this isn't the kind of thing the SAS are likely to race over. Messy, tricky and utterly hilarious.

Sweeper Arm - Balance on the podiums and hurdle the sweeper arm challenge in the last man (or hen) standing challenge.

Punch Wall - Traverse the slim wall with taking a shot to the jaw... or worse!

totally wiped out Stag Do Legends

Book It!
Need more inspiration? Search all our stag do activities...
Enquire About totally wiped out Now!
Trustpilot

Please Note: We work with 1000s of suppliers across the UK & Europe so prices, availability, photos and specifics on our totally wiped out activity may vary depending on your preferred location and dates.