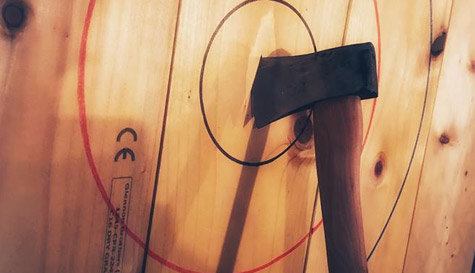 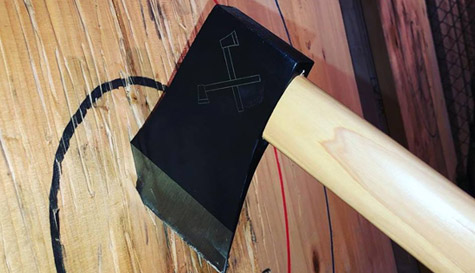 There's is possibly nothing more manly than throwing a bloody great axe and being able to fell your target at a single blow. Not only is our Edinburgh stag party indoor axe throwing brilliant fun and hugely competitive, but it's also brilliant training in the event of a zombie apocalypse (oh. it's coming!).

However, let's get down to basics. Stag throwing is something that does feel ingrained in our psyche, our ancient ancestors were using axes as weapons, across millennia man has thrown axes to hunt his targets, whether that's game such as small deer or foot-dragging zombies, one blow from a well-aimed axe and it's game over. And that's the joy of this amazing activity, if you and the guys have ever got competitive over a game of darts then this is taking darts and pretty much every other target sport to the next level.

Bowling? No thanks, grandad!
Darts? You hold on to your pretty little plastic feathers their sweetheart.
Archery? Close but it's not like having a heavy blade in your hand then hurling it through the air to hear that satisfying 'thud!' as it buries itself in the wood.

No, axe throwing really is in a league of its own. Slightly hungover blokes, throwing deadly weapons for laughs, what could possibly go wrong? Despite the blurred eyes and tender heads, the guys will soon get competitive, there is something so primal about this that all the guys will want to prove their mettle while chucking the metal.

You'll be given a safety briefing (and naturally the site does take safety very seriously) then you'll get a few practice throws. The indoor range is very much like darts, you stand in marked lanes, with the wooden target facing you and while you're throwing the rest of the stags will be watching and letting you know exactly what they think of your wrist action. And yes, this is one challenge that really is all about wrist action so you can expect plenty of stag banter.
Don't miss out! 😭

Please Note: We work with 1000s of suppliers across the UK & Europe so prices, availability, photos and specifics on our urban axe throwing activity may vary depending on your preferred location and dates.