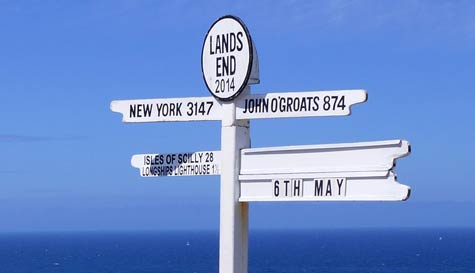 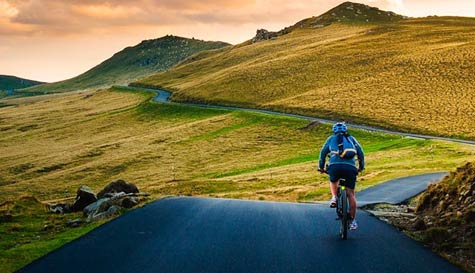 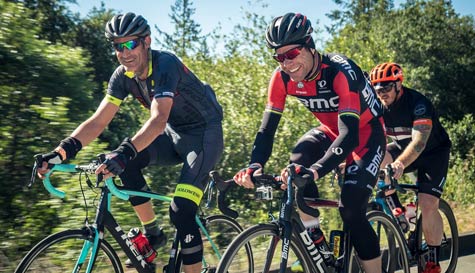 More About Stag Do Land's End to John o' Groats

Starting at the most southernly point on the UK mainland, the route passes along the stunning Cornish clifftops, passing St. Michael's Mount. This is a nice day to ease you in, the highest point stands at 150m, then it's an easy 3km descent to Wadebridge.

You'll definitely be going green as you pass through woods, green fields and across from Cornwall into Devon. You'll also skirt Dartmoor, Hound of the Baskervilles country. The route also crosses several rivers including the Camel, the Tamar and the Dart, as well as some steep ascents.

You'll start hilly but get flat so at least the day gets easier. The route climbs almost 300m as you navigate the Exe valley. The flatter fields of Devon and Somerset await.

Pass the impressive Wells Cathedral then it's a 200m climb over the Mendips. Things get softer as you bypass Bristol and take the cycleway with impressive views of the Severn Estuary before crossing into Wales.

You'll follow the ancient route of Offa's Dyke built by the eighth century Mercian king to mark boundaries and defences to his kingdom. You'll follow the once lawless Welsh borderlands and pass through the historic cathedral city of Hereford.

Still on the Welsh Borders, you'll head into the Cheshire plains. This is Premier League land with many footballers' homes, then it's on to the Wirral before crossing over the Mersey to Liverpool.

On the 7th day, you don't get to rest, you get to cycle through Lancashire, around Morecambe Bay and into the Lake District close to Windermere. After traversing the eastern shore of the lake, you'll pass Grasmere and the ancient Dunmail Raise. Then it's the impressive Derwent Water into Keswick.

Wave goodbye to Keswick and pass the peaceful villages of the northern Lake District close to ancient Carlisle. You can then get ready to belt out some Proclaimers anthems as you cross north of the Border into Bonnie Scotland. Pass the Solway Firth through to Dumfries. This is one of the flattest stretches of the journey.

When the going gets tough... It's now up into the Queensbury Hills as you ascend nearly 300m at New Cumnock. But what goes up will must come down towards the coast north of Ayr for some island-hopping. A ferry will take you to the Isle of Arran.

After a quick detour around Arran ("Because we didn't have far enough to cycle already?!?"), you'll take the ferry to the long Campbeltown peninsula, and then cycle along the coast of the Western Highlands. We won't sugar coat it, there are some tough ascents on this leg.

The cycling gets tougher, gradients sharper but the views are worth it. From Oban to the shores of Loch Ness, via Fort William, Loch Lochy and Invergarry the scenery is awesome. Mountains rise around you including the UK's highest, Ben Nevis. You'll now enter the heart of the highlands and on to Inverness. The day will end with a much easier ride.

You'll skirt the northern edge of Loch Ness, turn inland at Drumnadrochit, and then start a 300m ascent before the run to Muir of Ord and Dingwall along the coastal route on the Cromarty Firth.

You're nearly at journey's end. With, hopefully, high spirits you'll cycle along the quiet majesty of the Caithness Peninsula past Berriedale and Old Wick castles until eventually, the finishing line comes into sight. John o'Groats. You made it!

We work with 1000s of suppliers across the UK & Europe so prices, availability, photos and specifics on our Land's End to John o' Groats activity may vary depending on your preferred location and dates.

An epic stag test and final journey
to see the groom off in style.