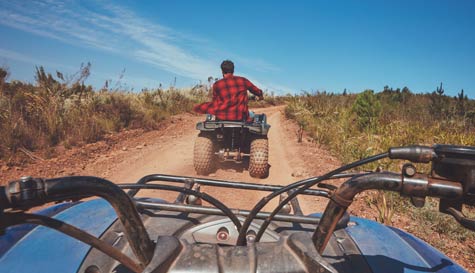 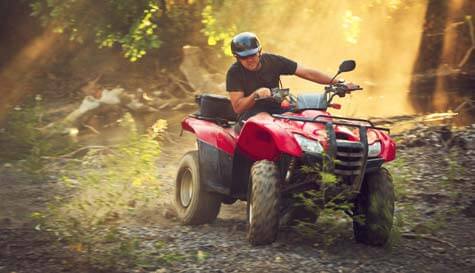 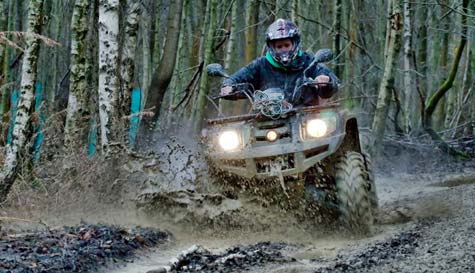 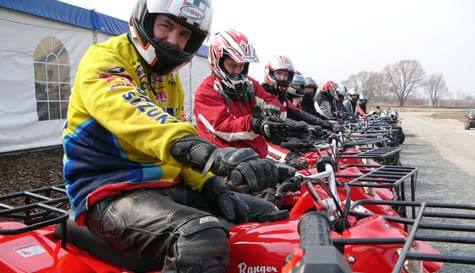 For an uber stag night of beery good times, head to the German bier house.

More About Stag Do quad biking

Be it in the Algarve or Amsterdam, Birmingham or Brecon, stag party Quad Biking is an awesome activity to throw into the mix on the groom's epic weekend away. You'll "saddle up" and take on some of the trickiest, dirtiest and most demanding terrains across the continent as you head out stag-style in this all-action, high-octane, adrenaline-pumping activity.

Do You Have The Quads?!

Quad bikes are designed to be driven over a wide variety of surfaces and you'll have a real chance to push them to their limits and compete against the guys. These quads are single operator only, which will give you the chance to zip off without any of your mates slowing you down.

A Quad Biking Stag Do Guarantees:

The quads themselves will vary from 100 to 250cc beasts, but typically, you are likely to be on a high brand 125cc quad bike which seriously packs a punch.

Depending on where you want to go, we'll build your quad bike trek accordingly. In many of the locations, you'll head out on an epic adventure and your instructors will lead you through a challenging journey where you'll follow single file taking on each potentially hilarious and nerve-racking challenge one by one. All the time, being encouraged by the instructor and potentially ridiculed by your group.

Trekking may suggest that you're playing it safe, but the days of quad racing have just about finished. Accidents such as Ozzy Osbourne's famous smash (collar bone, 8 ribs, damage to the vertebra, 2 cocktail glasses and a pillbox) have meant, over recent years, quad bike insurance has made like a genetically modified beanstalk and hit the roof! Subsequently, we've looked for the greatest, but safest ways for you and the boys to get the most out of a legendary stag weekend activity and quad bike trekking is one of those ways... trust us, you'll love it.

"Probably the best quad biking I've ever done. Instructors were great whilst the course was challenging and fun. Had a very good amount of time in the quads - loved every minute! Would highly recommend."

"The quad biking was great! Really friendly, helpful and informative guides! We all loved the experience and they even catered for the few who had done quad biking before by taking them round a harder course. Would very highly recommend!"

"Excellent quad safari, all on our own quads, and the instructor took us on a great trail."

"Amazing place. Great fun. Would do it again."

"Overall great experience. Had a laugh between the group as well as the staff who were very friendly and approachable."

"Best part of the day, thoroughly enjoyed by all."

"This event was fantastic. Instructors were great. Can't fault this event."

"I think this was everyone's favourite event, the instructor was great and the course was fun, it turned out to be a great hangover cure."

"The instructor was very good, the course through the woods was exceptional."

"Amazing, all the party thoroughly enjoyed it! Great staff and such good fun!!!"

"Excellent from start to finish. The instructor was fantastic."

We work with 1000s of suppliers across the UK & Europe so prices, availability, photos and specifics on our quad biking activity may vary depending on your preferred location and dates.

"The quad biking was great! They even catered for the few who had done quad biking before by taking them round a harder course. Would very highly recommend!" - Ali Bidwell