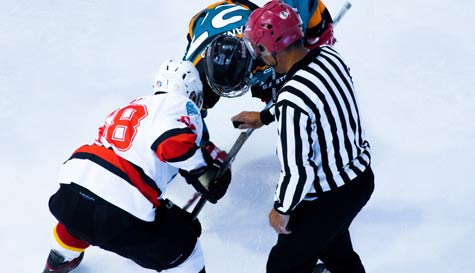 Have you ever watched Dancing on Ice? Did you get the feeling that what it lacked was bloody hitting sticks, body armour and the threat of simmering violence ("Look at her! That Jane Torvil's going to kick off at any minute..."). Then ice hockey is for you.

One of the most explosive and exciting sports on the planet. Six heavily armoured men, travelling at high speed, on ice and every one of them with a penchant for "sticking one on their opponents". It's a proper sport.

If the groom and his stags are real sporting fans then an ice hockey match is something every one of them should tick off their sports bucket list at some point in their life and this amazing activity will let you do just that. You'll have tickets to the match reserving your seats.

On arrival, you'll each get a pair of foam fingers (because until that moment your life hasn't been complete) and then make your way to your seats. It'll then all kickoff and it really is absolutely pucking brilliant! Ice hockey virgins will be amazed by the speed of the sport, both of the players and the puck travel at incredible speeds.

The guys will also receive drinks and popcorn plus there'll be a special message to the groom posted on the Jumbotron big screen.

Please Note: We work with 1000s of suppliers across the UK & Europe so prices, availability, photos and specifics on our ice hockey spectating activity may vary depending on your preferred location and dates.