Las Vegas is party. It's almost like the city has shares in the word and is determined that all it's visitors should have the best time ever. As a result everything is done on a grand scale, especially the clubs. Waterfalls, swimming pools, gold coated walls, circus performers, world famous DJs, it's clubbing on a different scale! Here's our rundown of the hottest clubs in town.

With guest star DJ's such as Calvin Harris and Steve Aoki regularly dropping in, Omnia has cemented its place as one of the best clubs not just just in Vegas but on the planet. Set in Caesars Palace, the prince among party venues doesn't waste much time on gimmicks and is all about dance music. If you fancy a breather there's also an outdoor terrace with stunning views down onto The Strip.

Part of the club dynasty born in New York, 1 OAK (1 Of A Kind) brings the Big Apple party vibe to Vegas. Set in the Mirage Hotel and Casino Resort, spread over 16,000sq feet and two main dance rooms this is where music and street style collide it has already attracted some impressive names to the turntables including Fergie and Kanye West.

Set within the Tao dynasty of evening venues that includes an Asian Bistro and beach club, this amazing nightclub is reached via a candlelit tunnel in typical Vegas theatrics (you'd expect nothing less from a club inside the Venetian Hotel resort). There are a number of different rooms catering for different musical styles but the biggest crowd puller is regular guest DJ Snoop Dogg.

Location, location, location, Hyde's really does have it, situated in the Bellagio, right behind the famous fountains. Guest DJs include Lil Jon and Brody Jenner (son of Caitlyn). The open air venue has a great view of the fountains and likes to mix it up with costume parties, themed events and champagne showers.

This Eastern-inspired venue within the impressive MGM Grand boasts an outdoor garden and big name DJs including Calvin Harris, Steve Aoki and Tiesto. The club is spread over three floors but the giant main floor is where the real party action is to be had with its leather clad babes riding dragons (as you do) and giant dancefloor. Top tip, get a Hakkasan card for speedy entry and a drinks tab.

This roof top club really does have a certain je ne c'est quoi. Situated under the impressive Eiffel Tower of the Paris Hotel this is a party with decadence to turn the heads of party revolutionaries. This superb venue offers over 22,000sq ft of dancing space and stunning views of The Strip. A definite must see for club aficionados and something completely different.

Mandalay Bay Resort definitely boasts one of the most impressive clubs you'll find in Vegas (a city that has very high bench marks of 'impressive'). Combining cutting edge technology, giant video walls, and live performance with top DJs this is clubbing on a different level. Acrobats, aerialists and other surprises will amaze your eyes while the likes of Carl Cox, Skrillex, and Alesso will rock your feet.

What self-respecting club doesn't wish it had a ninety-foot waterfall that plummets down the side of a man-made mountain? This incredible club inside the Wynn Hotel resort is on another level. Jet-filled nitrogen cocktails, fountains that spit flames from the top, walls lined with Louis Vuitton luggage, this is clubbing Vegas style!

Epic pool club by day, outstanding clubbing venue by night, the Encore Beach Club really does have all basis covered and attracts the biggest names and party crowds. Heading to the bar you'll be greeted by the giant snake that seems to guard the bar staff or perhaps it just came to party? Also situated in the Wynn Resort, the outdoor venue lets you dance under the stars in the warm Nevada air.

Planted firmly on the top few levels of the Cromwell Hotel, Drai's is all about Hip Hop and R&B and has attracted the likes of Iggy Azalea to join the fun. As well as a superb sound system and giant glitter ball, the venue boasts several bars and even a pool area with amazing views of the Bellagio Fountains and Vegas. Partying under palm trees as you gaze out along The Strip? This is how to party.

Offering a selection of different rooms including the cool sounding Boom Box Room and Library (not a book in sight!) this isn't about the star names. This is the people's party with a pool, circular dancefloor, giant mirror ball, it's a proper club, sure it has been Vegas'ed but it still feels real and urban with great music selections.

If you like your venues with a bit of 'sleb on the side then Jewel is the one. Drake, The Chainsmokers, Steve Aoki are just the tip of the name dropping iceberg that have played this awesome venue. Not afraid to shake it up musically there is something for everyone, with five separate VIP rooms. It's also massive and every night the crowd are whooped into hysteria like any minute someone might turn the power off. A great place to join in the fun.

Of course the walls and should be decorated with real gold, this is Vegas! This amazingly modern club manages to somehow whisper of another era while pumping out epic dance and R&B tunes. Yes the swimming pool, gold walls, palm trees and Nevada sky give you a 30's whiff of anything goes excess but big names like Diplo and Marshmello slam it back into date. 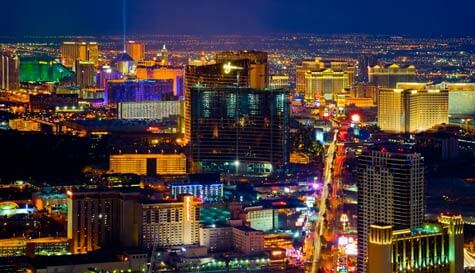 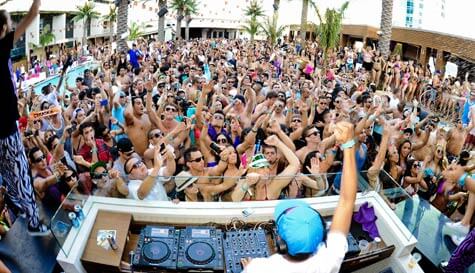 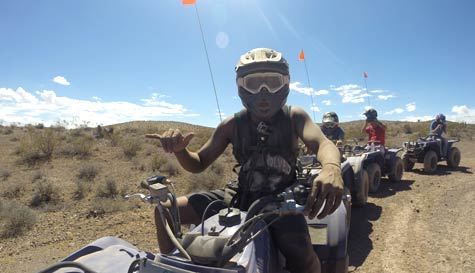