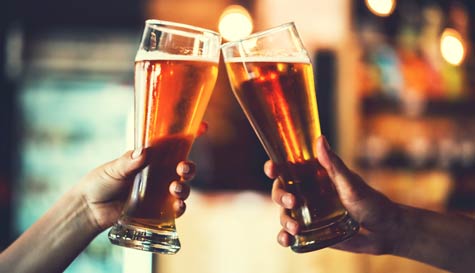 With full stomachs, enjoy a VIP experience at one of Prague's most exclusive clubs. Read more...

On a stag party, you don't want fancy dishes with a beetroot jus, avocado dressing and tiny portion sizes. We'll leave that for the hen party, thanks. No, you want uncomplicated, BIG dinners that set you up for a huge night of pre-wedding laughs.

That's exactly what you get with our epic Traditional Dinners set in one of Prague's top restaurants. On arrival, you can make your way to your reserved table and as you will have already pre-paid there'll be no need to do a Rachel Riley (or Czech equivalent) with the bill afterwards. Just bring extra money for drinks.

You'll be welcomed with 2 free beers each from a Prague brewery while the groom will be treated to some homemade Czech moonshine to toast his last few days of single living before he gives up good times like these for weekends around the in-laws. Plus, it's fair to say that having drunk homemade Czech spirits, he can tick off another box on his alcohol bucket list.

This traditional stag feast is most certainly worth going native for on your big weekend. Hearty flavours, filling portions and delicious beer, it's an epic dinner worthy of the occasion.

Svickova A dish that varies in ingredients depending on the cook, Svickova typically features beef pierced with speck, bread dumplings and a vegetable sauce with cream, carrots, celery and parsley roots.

*Dishes and sides may vary, please ask our team for more details.

We work with 1000s of suppliers across the UK & Europe so prices, availability, photos and specifics on our traditional dinner activity may vary depending on your preferred location and dates.

Treat the groom to the ultimate last supper. Czech style!