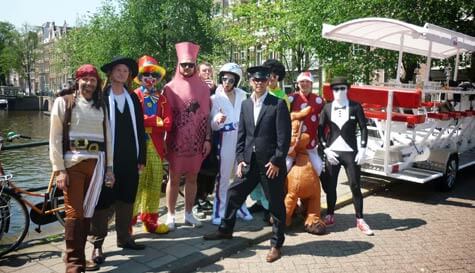 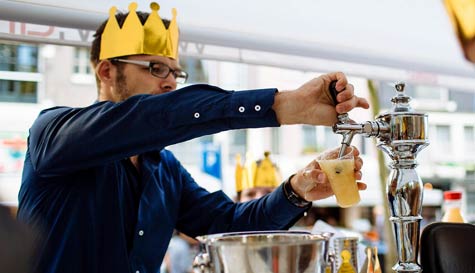 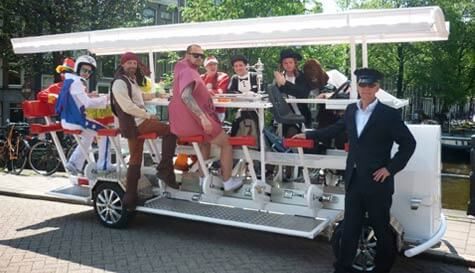 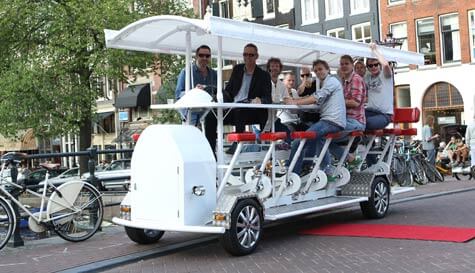 After a day of easy riding enjoy a Strip Dinner. Read more...

More About Stag Do beer bike

It's like someone sat down and worked out man's perfect weekend activity. "I want to be sat at a bar, with all my mates, while gently exercising and drinking beer!"

Gentlemen, may we present the greatest mode of transport on the planet...

Yes, if you want to get out and about in Amsterdam without the effort of walking everywhere, look no further than our thirst-quenching beer bike!

Glide through the Amsterdam streets in style with our tandem bicycle while enjoying a twenty-litre tank of beer with the guys. This is the ultimate in mobile drinking luxury.

You'll be greeted by your own chauffeur before boarding this custom made bike and enjoying a guided tour. It's a great way to hit the streets, soak up some of the local culture, and drink beer. What's not to like?

Plus you can put this in the healthy column - you weren't just sitting in a pub, you were out cycling!! (The fact that there was beer on tap was purely for rehydration purposes).

Ok, so Premier League footballers and Olympic athletes probably don't include a beer bike as part of their training regimes, but, quite frankly, it's more fool them because they don't know what they're missing out on.

If only all exercise tasted this good, we'd be riding in the Tour de France next year. Our Amsterdam beer bike is the stuff of stag do legends!

We work with 1000s of suppliers across the UK & Europe so prices, availability, photos and specifics on our beer bike activity may vary depending on your preferred location and dates.

Just about the most fun you can have with the brakes off!