15 Things You Should Do on a Stag Do 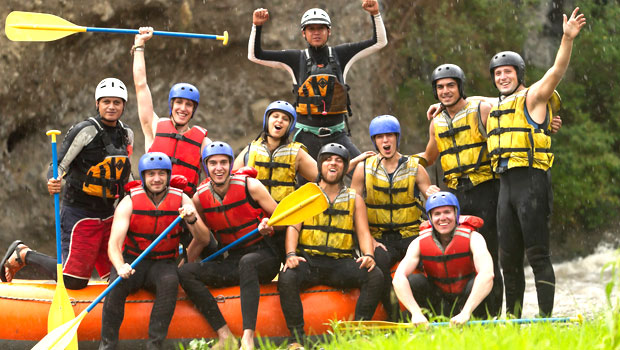 If you’re going to make the stag weekend truly legendary (and anything less than ‘EPIC!’ should be considered ‘failure’), then there are some fundamentals things that you simply MUST do. Check lists at the ready…

It’s the first rule of any good stag weekend. Yes, Steve’s desperate to stay in touch with a girl he’s just met and Eddie has a Facebook addiction but this is a stag do. You should only be talking to each other and no word, photos or videos be allowed to escape so put the phones in the hotel’s safe.

It’s a chance to really eat like the cavemen you are. Steak, BBQ, burgers, pizza, etc. The first man to mention ‘salad’ loses and should pay a Stag Forfeit. But if you really want to take it to the next level, then there’s only one way to go…

The perfect way to create a little bit of stag bonding is by getting all the guys kitted up. T-shirts, fancy dress, or even just setting a hat agenda is a great way to set the crazy tone for the weekend.

No stag do is complete without someone setting a wager on something truly stupid (but non-life-threatening). “I bet you, you can’t…” And on any good stag do, there is always one bloke daft enough to take the bet. Game on!

Find pastures new; broaden your horizons; hit the road, Jack! A stag weekend is the perfect opportunity to visit somewhere new, so stick a pin in a map and find a totally new party playground to explore. The world’s your oyster!

And a good road movie needs a soundtrack. Pick songs that link you all to the groom, his favourite bands and songs from his teen days. Throw in some true anthems and you’ll have the perfect stag party playlist.

It’s only right he should stand out from the crowd, so give him something to wear. Pipe, slippers and a dressing gown to mark his new status as a man of the house, a nice pink onesie as punishment for deserting the rest of you single guys, or, if you’re playing Paintball, give him a hi-viz suit to make him easier to see/hit.

On a stag do, it’s not about the taking part, it’s the winning that counts, especially if you’re on the opposing team to the groom. Seeing him A) lose and B) make an ass of himself will be the highlight of the weekend. So, no matter what the activity – pick sides, line the boys up, and let battle commence!

We’re not talking about something you sip with pinky fingers. We mean a proper man drink. Something that’ll melt plastic straws, a drink to give a good name to… something with flames!

It’s the greatest weekend of the groom’s life, so make sure you mark it in true style by doing something totally new. Shoot, race, film, climb, blow up… a stag weekend is the perfect opportunity to do something a little bit crazy. Zombie Apocalypse, anyone?

Make sure you keep the guys in line (or simply up the laughs) by adding a few basic rules and fitting Stag Punishments for any miscreants.

12. Challenge The Groom At Something

He’s about to marry a wonderful woman and he’s ridiculously happy, so make sure you bring him down a peg or two by reminding him exactly who is the ‘Best Man’.

You’re his best mate, you know his Achilles heel – it could be his hair, his football team, his Spotify Playlist with the Justin Bieber album he thinks no one knows about. Find his weak spot and expose the groom when he least expects it (it’s what he would’ve wanted).

You’ve got the playlist, so pick the (totally random) anthem for the weekend, and you and the guys can serenade the groom: “It’s the end of the world as we know it…”

15. Bring The Groom Home In One Piece

But above it all, there is one thing you must do more than any other: Bring the groom back in one piece! No missing eyebrows, no new tattoos, no extra scars/bruises/wives that could ruin the photos on the big day. Get this wrong and you face the wrath of the bridezilla. Don’t say we didn’t warn you!