If you're looking for an alternative European party destination that won't break the beer budgets, a Belgrade stag weekend is spot on. Avoid all the hassle of planning your weekend solo and grab the help of StagWeb to guarantee a memorable send-off!

Save time, hassle & money with StagWeb. Get your Belgrade stag do quote today

A Guide To Your Belgrade Stag Weekend

Whether the boys are after some eagle eyed firearms practice at a Target Shooting or Clay Shooting day out, or they want to get Fast and Furious with wheel to wheel battles on the Go Karting circuit, Belgrade has some staggeringly good activities for all lads to get stuck into.

Where to Drink in Belgrade

Belgrade constantly tops lists of the best party cities in Europe, so you know you’re in for a boozy ride!

Big is best here, with flashy lights and electric bars buzzing with neon lights as friendly staff dish out the drinks at a lightning pace. You don’t even have to wait for the weekend as every night in this city has something going on and aims to be better than the night before.

The Savamala and Cetinjska neighbourhoods are dubbed the ‘Berlin of Belgrade’ because of their urban vibe with a heap of cool bars if you fancy a break from the madness. You can grab a refreshing craft beer amongst very hipster surroundings. 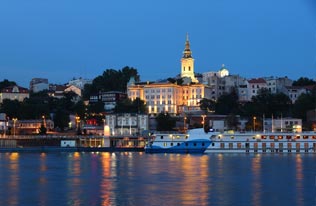 Riverboat clubbing is huge in Belgrade, and with the Sava and Danube both lined with the best seaworthy nightclubs around you'd be wise to take the Serbian stag do riverside for some epic wet and wild nightlife!

Serbian food and an unbeatable view over Belgrade is what you'll get from a trip to Avala Tower. 205 metres high and offering the stag 360 degree views of Belgrade, this is an epic way to get your head around the awesome city ... you can even enjoy some Serbian food while you're up there. One small thing ... the original tower was blown up by NATO in 1999, but that probably won't happen to this one.

Serbian Orthodox believers jump in the freezing Danube River every winter.
Belgrade has a Silicon Valley, but it's not an area with a high number of breast implants.
It's common courtesy to greet visitors with a spoonful of a preserve called Slatko.
During the 1990s inflation a week's wages would not be enough to buy a litre of milk.
Vampire is the only Serbian word used globally.

On Ya Bike! Getting Around Belgrade

Belgrade is best seen on foot, but if you're looking to see and do as much as possible on your Balkan stag do you'd be wise to make the most of the city's extensive public transport system. Buses, trolleybuses, trams run until 4am in the city and are very economical, especially if the boys make the most of day tickets.

Why choose Belgrade for a stag weekend

Belgrade is the most edgy, energetic, and all around electrifying party city that you've never heard of - it might not have the reputation of Ibiza, London, or Amsterdam, but that's not stopping it taking the clubbing world by storm, topping Lonely Planet's list of top 10 party cities in the world and fast claiming its place as one of the coolest capital cities in Europe. Missing the opportunity for a Belgrade stag do is missing the opportunity for one of the most astounding, crazy weekends in the whole continent. Serbians would be the first to acknowledge that their country has a troubled history, but in Belgrade they partied outdoors whilst bombs dropped, making it very clear that nothing was going to come between this city and a good time.

Now things have stabilised there's even more reason to celebrate, and every night is Friday night in the underground and apartment bars, and there's loads of epic Belgrade stag do nightlife on offer. Partying is practically a national pastime, and you're invited! It's not all clubbing though - Belgrade has far more than just that to offer. We love a Belgrade stag weekend not just for the nightlife, but for the crazy amount there is to do in the city, including festivals, activities, and 7000 years of culture. There's even a beach, and soaring temperatures of 23 degrees - you couldn't have designed a better stag do destination.

When's good for a Belgrade stag do?

Forget about Magaluf or Barcelona - if you want a hot summertime holiday, Belgrade has to be top of your list. With the temperature averaging highs of 29 degrees, sun cream and shorts are definite necessities. We'd pack the budgie smugglers too - Belgrade may be landlocked, but that hasn't stopped the locals from building their own beach around the river, with around 100,000 daily visitors in summer.

Ideally, the closer to the river the better - particularly in summer, when all the clubs relocate to boats, and take to the water. The city centre, around Terezije or Savamala, is a good all arounder - close to the nightlife, as well as the restaurants and shops. If you're a little further out there's no problem - taxis are incredibly cheap by European standards, and splitting one between the group of you cuts costs even further.

How? Getting to your Belgrade stag do

Not everyone has cottoned on to Belgrade as a top destination yet, so it's still only London that does direct flights. London Heathrow and Luton both do trips to Belgrade a few times a day with Jat Airways or Wizzair, and the flight is about 2 and a half hours. Belgrade's airport is about 12km west of the city centre, but there's a bus route and a minibus to take you in to town, or taxis are a fairly cheap option when travelling in groups.

How to finance a jet set lifestyle in Belgrade

Flying off to exotic shores always sounds like an expensive trip for the lads, but Belgrade is more likely to save you money in the long run. Sure, you've got flights to pay for, but after that things more or less take care of themselves - beer and food are about a third of the price they are in the UK. StagWeb are here to help, using our experience and Belgrade contacts to get you the best deals on everything you could need for a top quality weekend at stag friendly prices. A place to stay, a means of travelling, activities for the day and the best bars, clubs and evening entertainment while helping you save even more for the beer kitty.

It's not just saving money with StagWeb (although we definitely do help with that). We can also help you with all the other aspects of your Belgrade stag do. We've got the best Belgrade stag do activities already hunted down, so you don't need to worry about brushing up on your Serbian and making any long-distance calls to get things sorted. We also know the whole city very well - and that includes the best clubs, the best bars, and the best restaurants, saving you the indignity of trying to mime ‘nightclub' to a poor hotel receptionist. We’ve been planning epic stag weekends since 2002 so put our experts to the text with a no hassle, no obligation quote.

Next, you can us a call on 01225 474200, and let our Belgrade expert tell you a bit more about it - it's completely free advice, and with no commitments or obligations. If you've already got a fairly good idea of what you're looking for, just drop us a quick enquiry and we'll get back to you with a quote so you can start seeing exactly what you want on your Belgrade stag weekend!