I'm Jamie, StagWeb's Gdansk Destination Specialist. Have a browse around or send me a quick enquiry now, or even call me on 01225 474208.

Build your Gdansk stag do

Special Offers
from £99
Packages from £99

Gdansk for the memories!

Give the blushing bridegroom an unforgettable Gdansk stag weekend. Hot babes, cold beer and stag bargains.
StagWeb will do the hardwork to save you time, money and hassle and you'll still get all the praise! #StagLegend!

Plan your Gdansk stag do

What they said about Gdansk...

Great company to book with, makes everything so simple and the individual payment system is a godsend for organizing large groups.

A Guide To Your Gdansk Stag Weekend 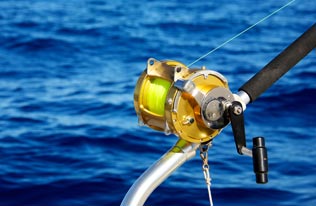 With a bountiful supply of bumper beaches, Gdansk is the perfect place for a seaside stag do of wet and wild carnage for all the lads. Whether it's a fast paced session of Ringos or an all day Deep Sea Fishing voyage, you'll all need your sea legs for this coastal gem.

Brovarnia Gdansk - For those seeking out top food and a traditional Polish pint, highly esteemed microbrewery serves up some of the best beers in the Baltic!

Café Absinthe - As the name suggests, the venue is a great place to sample a huge range of drinks with everything from local brews to absinthe shots and guest ales.

June - Open'er Festival
Black Key's Dan Auerbach described Open'er as "a quarter of the size of Glastonbury, but ten times the energy."

August - St. Dominic's Fair
A cultural festival that runs for two weeks during summer, this historic fair mixes Polish tradition with hilarious events to create a 'something for everyone' city annual.

October - Likes Festival
Likes Festival features the best and most bizarre of Poland's online creators for a modern festival covering everything from food and music to games and fashion. 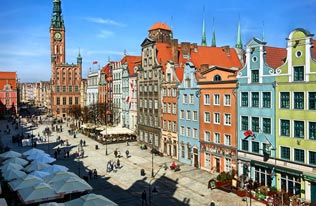 For a true taste of Danzig you've got to venture into its beating heart, Śródmieście, and its buzzing streets of Ulica Długa and Długi Targ. You'll find plenty of Polish pubs in these streets making it the ideal place to kick start a Polski pub crawl!

Often forgotten, Gdansk's beaches are among the best in the Baltic and Stogi beach is a particular highlight for any sun and sea stags. The city is steeped in history both military and maritime and the famous city canals are also a perfect spot to catch a waterside Polish pint any time of the day.

The first shots of World War Two were fired in Gdansk.
Nearby Sopot boasts one of the longest piers in Europe, 640 meters long!
The city is the birthplace of goldwasser ... AKA vodka with gold bits in it.

A Taste of Gdansk

Eats - Bar Turystyczny. This cafeteria styled restaurant is modelled after the traditional Polish milk bars that once catered to the city's workforce. The food is traditional and simple and prices are superb. Authentic eating, Gdansk style!

Drinks - Polish beers aside, Gdansk's best drinks offerings are its vodkas, and in particular its goldwasser. Vodka with flakes of gold in it, goldwasser has been distilled in the city since the 1500s, so there's no better place to sample this awesome concoction.

On Ya Bike! Getting Around Gdansk

Gdansk is well served by bus, tram, train and even boat routes ensuring the stags have plenty of ways of getting from A to B by way of several pubs and bars!

Special tickets that allow 24 hour use of trams and buses can be especially useful for any stags who require a little flexibility between pub stops.

"Halo" - Hello.
"Jedno piwo prosze" - One beer please.
"Wszystkie swoje piwa proszę" - All of your beer please.
"Posiadasz jakąś wódkę ?" - Have you got any vodka?
"Pan młody będzie płacić za nich" - The groom will pay for those.
"On jest zabawny patrząc jeden." - He's the funny looking one.

This little gem on the Baltic coast really is something unique for the truly discerning stag about town. A Gdansk stag do is something totally different from the norm and one you, the boys and most importantly the main man will remember and talk about for years to come.

What Does A Gdansk Stag Do Offer?

Situated on Poland's north coast at the bottom of The Baltic Sea, the old world charm and new age lifestyle of the tri-city metropolis makes a Gdansk stag do truly memorable. With a catchy moniker like Gdansk it's got to be fun, and by Polanski it is. Ok granted, in the winter months it's likely to be colder than a tart's kiss, but that's part of the fun - and in the summer (May-September), Gdansk is a bumper beach bound Polish sensation!

Activities? Yep! A Gdansk stag do has more fun than Poland has vodka... Actually remembering our last trip to the Baltic bar rooms there's probably no reservoir to be found of anything anywhere that flows as readily and frequently as Polish vodka in a Baltic sea port (forget the rum for these salty sea dogs, Poland was born, raised and weaned on all manor of "Polish water") but there is still a staggering amount of mayhem to be had during your cultural exchange trip.


Whatever you seek you'll find every pleasure and adventure to be had.

Booking through StagWeb offers your party a massive array of stag do activities in Gdansk for you to get your teeth into, so you won't be short on challenges to put the boys to the test.

In a word... No. Poland is no where near as pricey as other Baltic states, you can be sure of a great weekend without having to break the budget. But don't book too late. We deal with thousands of stag parties every year and invariably it's the panicked best men who realise they have two weeks to go and still haven't put things in place that normally find themselves lacking time to really get the best out of the weekend.

Your Gdansk stag do should be a relaxing getaway for all concerned (except the groom of course who should be kept guessing and sweating over what "treats" you have in store for him). Including yourself, booking a stag do can be hard work when not done right. So we always advise you book early and then you can focus/panic about other matters like your wedding speech and leave your stag party preparations to us.


We won't give you hard sell and tell you what we think you should do, we'll listen to your ideas and help you build the perfect weekend to suit your group. At StagWeb we’ve been helping plan awesome stag weekends since 2002 and have a huge infrastructure of top quality, stag friendly hotels, activities and nightlife already in place. That means we'll do all the running around for you while you can bask in the accolades of your cohorts on a job well done.

Our longstanding relationships with local providers means we get special rates and exclusive deals we can pass on to you.

Why Don't You Trouser The Difference?

We have groups that book with us time and again every time another romantically kamikaze stag nosedives into matrimony, by consistently saving them cash it means they keep coming back. That's what makes good business sense to us. If you have a great weekend you'll come back again. We also book hundreds of stag reunions every year for guys that want to relive the big weekend.

You should know a little about the place you're going, in the last 100 years Gdansk has been at the forefront of two of the world's most significant events. Gdansk, it is said, is where World War II started. Gdansk was also influential as the starting point for the overthrow of an oppressive regime, with Lech Walesa leading the historically victorious solidarity movement and eventually becoming president in 1990. So if the Mrs is resistant to the stag weekend in Gdansk take a lesson from Lech, present a united front and exercise a bit of Polish Gdansk stag weekend solidarity, defend your right to Gdansk stag party! Failing that tell her it's a cultural trip.