A Warsaw stag weekend is stacked with massive activities, delicious eateries and monumental nights out, making it a certified stag playground where you and the boys can let loose and crank up the party. Avoid all the usual stress and hassle and book an unforgettable weekend with the help of StagWeb!

FREE cancellation on European weekends* Get a Quote >

Booking through StagWeb was the best decision I made. Saved so much money and time.

The capital of Poland is overflowing with hilarious, high octane, competitive and down and dirty activities to keep the lads busy over the stag do. From the banter fuelling Quad Bikes to the fast paced Go Karting circuits, to the awesome firepower of Target Shooting, Warsaw has it all!

Warsaw gets trendier by the second - it can be hard to keep up. Fashion-forward stags will feel well at home amongst the colourful bars and hipster hangouts that can be found with a little of StagWeb’s insider knowledge. We’ll find any excuse to visit Warsaw for both the culture and the booze!

Stara Praga and Saska Kepa are two of the coolest places to party in Warsaw. Whiskey in jam jars, cocktails in goblets, you know, that sort of thing. It’s just a short taxi ride across the river, but worth the tiny travel expense if you’re a group of sophisticated stags with a keen eye for aesthetics.

Sticking to Old Town means a banging range of gastropubs and places to grab a locally brewed pint. Wherever you are in Warsaw, you’re only a stone’s throw from a vodka shot. We don’t really know what you’re waiting for – book it, book it now!


Warsaw is known as the Phoenix City for its habit of rising from the ashes. 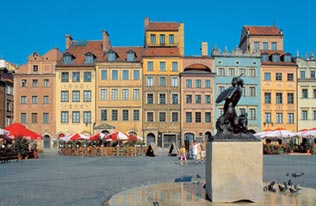 You'll find the best of the nightlife in the heart of the city centre. Just remember to pace your drinks as the local brews can be lethal. Eat, drink and be merry but go easy on the home brew vodkas.

Warsaw has a massive range of museums and monuments for history stags to sink their teeth into. However, any sport mad stags would be mad to miss out on a trip to the National Stadium Warsaw, Poland's largest football arena and the national team's ground.

Warsaw's old town is only around 50 years old.
The world's narrowest house (122cm wide) is in the city centre.
The Polish didn't invent vodka ... but neither did the Russians.

A Taste of Warsaw

Eats - Anyone visiting Poland has to try their national dish, bigos. A hunter's stew that's made of sauerkraut, various cuts of meat, tomatoes, honey and mushrooms, this hearty and warming meal is the perfect stomach filler ahead of a big Varsovian night out!

Drinks - Poland might be known for its beers and vodkas, but the Polish are also incredibly fond of their mead, a honey liqueur that's warming and sweet. Made in many variants across Poland, mead is an alternative party starter for an epic Warsaw night out.

200 bus routes, 30 tram lines, 27 metro stations make Warsaw and all of its districts, sights and bars accessible to stags looking to move around in a hurry and save their feet for the clubs. Tickets aren't expensive and a number of ticket options, such as weekend savers, are available.

"Halo" - Hello.
"Jedno piwo prosze" - One beer please.
"Wszystkie swoje piwa proszę" - All of your beer please.
"Posiadasz jakąś wódkę ?" - Have you got any vodka?
"Pan młody będzie płacić za nich" - The groom will pay for those.
"On jest zabawny patrząc jeden." - He’s the funny looking one.

You might not know your bigos and pierogi from your Wsciekly Pies but with more bang for your bucks than ever before, not to mention insanely hot nightlife and trouser busting menus, a Warsaw stag do is fast climbing the ladder to become one of the hottest choices in Europe!

Pole position - a Warsaw stag do

However you try to dress it up, whichever way you look at it, Poland's capital is never going to be famous for its picture-postcard views or delicate touch.  The city's been rebuilt more times than it can remember.  In its own words Warsaw ‘defies storms'.  It's been invaded, colonized, ravaged, ransacked and all but obliterated over the years but ever-faithful, determined and full of spirit (bucket-loads!), the capital has bounced back in determined style to bring you a truly cosmopolitan collection of top hotels, restaurants, bars and clubs that easily rival Europe's best.

Modern metropolis, clubbing giant, cuisine heavyweight (we're talking bring it to the table in a forklift kind of way!) and master of reinvention.  If its huge nights, action-packed days, hearty grub and crazy venues you're after (and quite frankly, we'd be disappointed if you weren't), then Warsaw's the choice for you!

So a Warsaw stag weekend in a nutshell?

So there you have it gents, a Warsaw stag do; rich in culture, blinding nightlife, white knuckle action, fine cuisine, traditional fare and with some of the planet's most potent poisons running through its veins (the fire-inducing mix of tabasco and vodka makes the legendary Mad Dog one for the truly brave!)

And all at a mere two and a half hour flight from Blighty!  And with budget airlines offering regular flights from across the UK, getting to Warsaw has never been easier or more affordable.

Give us a call! It really is that simple!  With a top range of proven ready-made packages you and the boys could be on your way to a weekend of thumpingly good tunes, stomach pleasing menus, world-class refreshments and stunning Poles dancing all at stag and budget friendly prices.

Absolutely!  If there's one thing Warsaw isn't short on its after-hours entertainment.  The capital is home to dozens of quality clubs full of scantily clad beauties for discerning stags to admire.  Gather the boys for one of StagWeb's strip dinners for a true feast for the senses, or jump on the VIP bandwagon for exclusive access to the hottest parties in town.

And when it comes to action?

You won't be disappointed!  Warsaw more than holds its own for daytime activities with everything from go-karts, quads and footie to paintball, off-roading and guns.  And we're not talking any old weaponry here, you and the boys will be getting your hands on AK47's and arms used by former KGB and Eastern European police forces!

Mad Dogs and Englishmen - where should we be?

The UNESCO celebrated Old Town, with its cobbled streets, traditional cafés and close proximity to the Royal Route, Fountain Park and Castle Square, is the ideal spot to soak up some culture and slow the place for bleary-eyed stags, but it's the more lively Krakowskie Przedmiescie, with its old-school vibrant style, Nowy Swiat, packed with bars, clubs and eateries and the trendy Praga and Śródmieście districts, where you're likely to be spending the bulk of your time.

When should we go to Warsaw?

You certainly won't be needing your speedos if you head to Polish climes in midwinter when temperatures easily fall below zero.  But that being said there'll be plenty of steaming grub and golden refreshment to keep the boys happy at the annual Christmas Fair, and with indoor venues pulsating through the low season, you won't be short on entertainment.  Spring through summer is undoubtedly when the capital comes alive, taking everything outdoors to feast, drink and party in the buzzing atmosphere of the Carnival, Midsummer's Eve, Autumn and Jazz Festivals.  Golden!

We’ve been planning epic stag weekends since 2002. Not only do so many of our stags say they’d book with StagWeb again but many of them do, taking advantage of our excellent loyalty rates. And being ABTA protected you and the guys can relax and book with confidence.

Your satisfaction really is our primary concern and with the very best in accommodation, activities and VIP access to the hottest joints in town, we're confident we can deliver a Warsaw stag do that will become the stuff of legend.