This coastal party town is where adrenaline junkies head to take on some of the best water-based activities our fine island has ever seen. Book your Woolacombe stag weekend with StagWeb to avoid all the planning stress and hassle, and guarantee an unforgettable send-off!

Save time, hassle & money with StagWeb. Get your Woolacombe stag do quote today

A Guide To Your Woolacombe Stag Weekend 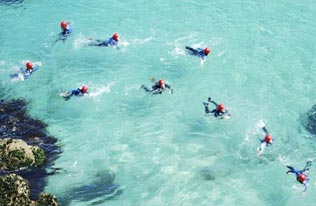 Pristine beaches, epic cliffs, and the best surf in England are what make a Woolacombe stag party one of the wisest choices any best man can make. For adrenaline seeking lads there's enough high octane action to make Evel Knievel look like a bit of a wuss. From daredevil Cliff Jumping and Coasteering to radical Surfing sessions and High Ropes.

Where to Drink in Woolacombe

Choosing Woolacombe as your stag do destination makes it clear to us that you’re a group of trend-setting stags! So, after a day of surfing and other mad activities, you’ll not just be needing a drink, but somewhere cool to drink it. Not a problem – Woolacombe is a goldmine for awesome pubs and bars-with-a-view!

Of course, everything is in walking distance, so start from the seafront and head into the centre to stumble across local favourites and hidden secrets. You’re in Devon now, so don’t miss the opportunity to try a local cider whilst you’re checking out the sea view!


According to TripAdvisor, Woolacombe has best beach in Britain and fourth best in Europe.

A trip to the largest island in the Bristol Channel, Lundy Island, makes for a unique day trip for any Bear Grylls wannabe stags. With sheer cliff faces to be tackled by climbers, rugged terrain for hikers and even a tavern for those who'd rather just sit and enjoy a pint in the middle of nowhere, Lundy Island has got all the stag bases covered.

Sir Walter Raleigh, Sir Francis Drake and John ‘Jack' Russell are famous Devonians.
Much of Woolacombe was privately owned until 1948.
The US Army practiced D-Day landing operations in Woolacombe.


On Ya Bike! Getting Around Woolacombe

Woolacombe is a small and compact resort town that is easy to walk around and shouldn't require public transport. Cycling makes getting around a little quicker, however pushbikes can not be hired from Woolacombe itself, though a number of cycle hire shops in the area (including one outside the nearest station) do offer this service.

Surfing slang for a wet and wild Woolacombe stag do!

"Akaw!" - Translates as "look guys, a big wave!"
"Amped" - To be excited.
"Barney" - An inexperienced surfer.
"Benny" - A non local.
"Choka" - Great/amazing/awesome.
"Clucked" - Being scared of a wave.
"Dude" - This can literally mean anything in surfer speak.

A guide to your Woolacombe stag do

It may be a small seaside town but a Woolacombe stag do has a smorgasboard of delectable treats for you and the guys to create the ultimate stag weekend. Forget the likes of Muscle and Palm Beach, Woolacombe has everything you could possible want from a beautiful coastal destination. Put together a package that incorporates a heady mix of thrilling outdoor activities with glorious summer nights, washed down with a cool glass of scrumpy.

If you're heading for stag do in Woolacombe, then you'd be a fool not to include activities that make use of the coastal splendour. Naturally, water based activities are on top form, with surfing, coasteering and kayaking firm stag favourites. Launch yourselves into force as you tackle some of Britain's most glorious and unreliable weather. What's great about what Woolacombe offers is that sometimes the more brutal the weather, the better the experience. We're not talking gale force winds and torrential rain here, but just enough wind speed to make surfing and kayaking adventures come to life as you and the guys battle the elements.

Is that a longboard in your trunks or are you just pleased to see me?

One of the favourites for any Woolacombe stag do is surfing and surfers world wide glide to its shores to ride the waves. Although stereotypically a summer sport, surfing can be just as enjoyable in the winter months, although the water may be slightly chillier. Our expert instructors know how to forecast the temperament of the waves easily and can guarantee epic waves all year round to learn how to effortlessly glide on a surfboard. We'll have you looking like a Californian surfing god in no time, you just might have to buy the golden hair and tan in a bottle first…


Here's some surfing slang to get you started:

So book our Surfs Up package and get amped up! Don't be a chubby checker, ride those waves, even if you do have boner style and don't worry if you become a frube, we'll still think you're a Big Kahuna!

What else is on offer other than ride ‘rad' waves for out Woolacombe stag do?

We’ve been planning Woolacombe stag weekends since 2002 and have built up a massive selection of stag friendly hotels, activities and nightlife, so sit back and let us put together the ultimate Woolacombe stag do for you and the guys - the only thing we ask you to do is restrain the stag from going skinny dipping at 2am. We've all experienced taking a dip off the English coastline and we're sure the bride would appreciate it if you delivered her man back without sporting an unusual shade of blue…!

If long summer days aren't your thing and you'd much rather wrap up warm and sample some of North Devon's finest draughts then plan your Woolacombe stag weekend for the winter months. Every year, the iconic Red Barn pub that overlooks the sea front hosts its annual Beer, Cider & Music Festival. Lasting 3 full days, the bar combines the best beer, food and music that Woolacombe has to offer, with live music playing all weekend. Get your chops around a mouth watering slow roasted pork belly, washed down with the award-winning, Cornish pale ale, Tribute, while listening to the local music and all on the sea front. This really is the perfect way to top off your weekend that will guarantee to get all the lads together and in the right mood.

However if sun, sand and surf really are your passion then attending the Gold Coast Oceanfest is an absolute must. Held at Croyde Bay, just a 15 minute drive away from Woolacombe, this festival offers more than just an electrifying atmosphere. With competitive sports played all weekend from surfing to ultimate frisbee there is plenty to get involved with. Add on top of that quality music acts that in the past have featured Bastille, Gabrielle Aplin and Ben Howard, this Oceanfest is not one to be missed.