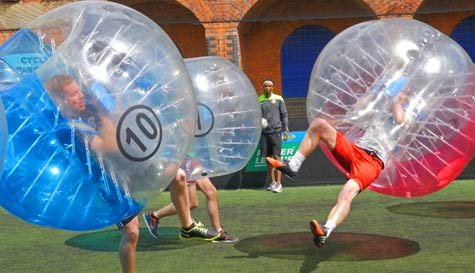 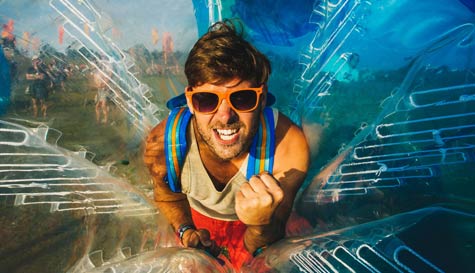 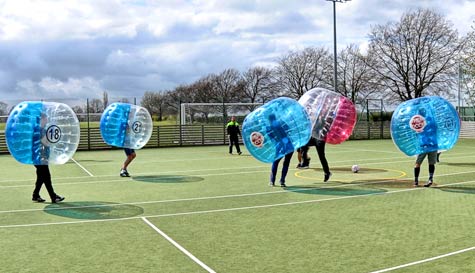 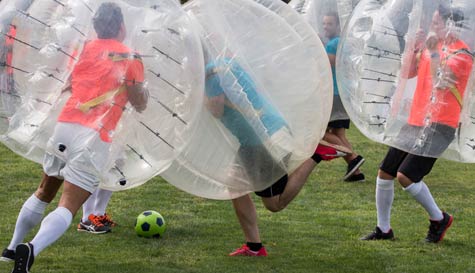 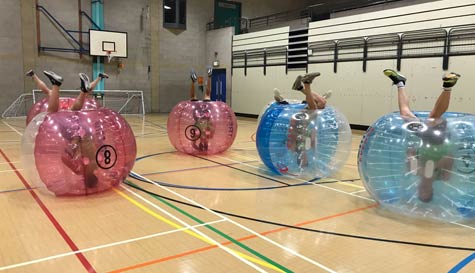 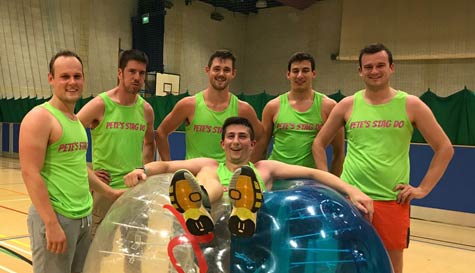 Watch our Bubble Football Video
"That would've been a goal had it gone inside the post."
- Michael Owen

"That would've been a goal had it gone inside the post."
- Michael Owen
Duration

Available all year round.

We'd love to hear Alan Shearer analysing a game of bubble football: "Well, Gary, the sloppy defending at the back was appalling and mostly due to the fact that the centre forward scattered them like drunken beach balls...". The action is fast, furious and always funny, and a bubble football stag do is our hottest activity with guys and girls playing all over the country!

It's Gunna Get Messi!

Bubble football is your classic game of football bounced on its head and volleyed into the top corner. Each player gets a bubble suit, naturally, which restricts arm movement, balance and a lot of your normal silky skills. Don't get us wrong, the game is still skilled, it's just more like Messi doing the Irish jig while wearing a giant hamster ball than your average game of footy.

Once happily encased in your inflated cocoons, you'll get to run, barge, bounce, stumble and roll all over the pitch. The ref will be on hand to uphold fair play and keep a reign on the chaos but, to be honest, once the game starts, things just have a way of getting out of hand all by themselves as the beautiful game turns ugly with hilarious results.

You certainly will be having a laugh. Watching your mate score a goal, running up to chest bump him and both bouncing off into row z like inflatable wrecking balls.

Sing When You're Winning!

All great stag dos need some 'friendly' competition, it's basic stag party MO. Bubble Football (also known as zorb football) really kicks that up a gear by adding huge laughs while still making sure all the lads can play to win. The only thing we don't understand is why it's not an Olympic event already?!?

While we would never knowingly do anything to harm "the beautiful game," bubble football is a hilarious twist on the finest sport known to mankind. It's as if someone just took the world's greatest game and made it even better!

*Sexy refs are not included but can be added to your session in some locations. Please ask our team for more details.

What to Wear for Bubble Football?

Your classic 5-aside attire will do the trick (shorts, t-shirt, astros), but make sure you take a change of clothes as it can get pretty warm bouncing about - particularly in the summer months - and you don't want to be kicking up a stink if you head for a post-match pint afterwards.

Can We Target the Groom and Bounce Him into Row Z?

"Fantastic, ran so well and so much fun!"

"Good fun, instructor was very good and had plenty of different games to play."

Tom Urmston | Bournemouth
"We had fun!"

"Well organised and arrived on time, we had fun"

Alistair Sumner | Cardiff
"It was a good laugh"

"Enjoyable and fun, it was a good laugh"

"Really good fun, and kept us out of the pub for a few hours!"

Leigh Foley | Bristol
"Such a laugh!"

James Cunningham | Newcastle
"We had an awesome time!"

"We had an awesome time - even the ones who do not like football in the group. The coordinator on the day made the event very enjoyable and ensured we were well looked after!"

"A good laugh was well organised and run. The instructor and venue were very good."