I'm Josh, StagWeb's Cambridge Destination Specialist. Have a browse around or send me a quick enquiry now, or even call me on 01225 474227.

Build your Cambridge stag do

Special Offers
from £89
Packages from £89

Give the groom a re-education and find the best Cambridge stag weekend ideas to
create your own tailor made package. "Prepare to party!"

Plan your Cambridge stag do

What they said about Cambridge...

Great stag weekend from start to finish. Excellent planning and communication from all staff making for a very stress free well organised weekend. All 11 members of our party enjoyed it throughly. Highly recommended. 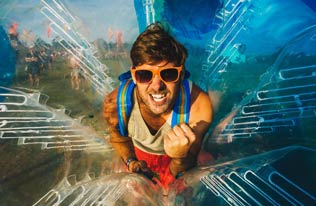 Cambridge has it all, create your own Top Gear challenges at the Off Road Karts track, strike Bungee Jumping off your bucket list or tackle the hilarious Bubble Football. Check out more Cambridge stag do activities... 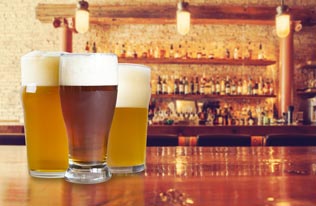 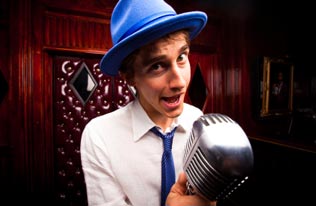 
"Oxford gave the world marmalade and a manner, Cambridge science and a sausage" 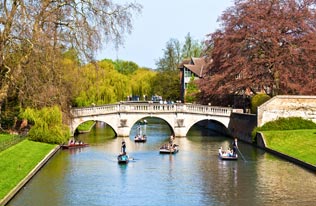 Cambridge is a city pretty much designed to party (we're fairly sure the university is just a clever cover story). Everything you need for a great night can be found within easy walking distance of the city centre, which is why we have handily arranged all our top stag accommodation in the heart of the city.

This is a city of learning (having produced more than 90 Nobel Prize winners) and as you would expect it is a city with culture. It's well worth any group of learned stags taking a wander around these amazing houses of nolidge, cleverness and stuff. The rest of you can head to the pub!

Residents of Cambridge spend more on take-aways than any other city in the UK.
Party animal Lord Byron (who was known to love revelry almost as much as women) kept a pet bear in his rooms while at Cambridge University.
The first ever game of game of modern football which went on to influence many of the games rules.
Both Hugh Laurie and his dad rowed in the Boat Race.

A Taste of Cambridge

Eats - Rockers Steak House If you're looking for superb flavours delivered in big American-style portions then Rockers serves great Tex-Mex food with all the trimmings washed down with a good range of ice cool beverages.
Drinks - Do NOT go to Cambridge without a visit to The Brewhouse. Not only do they serve ruddy good food, they brew their own ruddy good beer, All in all a ruddy fantastic night out.


"I find Cambridge an asylum in every sense of the word."
- AE Houseman

On Ya Bike! Getting Around Cambridge

Much of the city centre is pedestrianized making navigating between bars a doddle (or dawdle, depending how many you've already visited). If you've had enough of stretching your legs a MegaRider ticket gives you unlimited travel on the bus network.
Cambridge is famous for its bicycle friendly road ways so you can take to peddle power with a quick visit to City Cycle Hire. Or for a touch more sophistication try a punting stag do and enjoy cocktail hour on the River Cam.

Cambridge might be better known for lords of commerce industry and politics but it's also produced some of the nation's greatest comedians.

The first ever game of (modern) football was played in Cambridge.

What makes a Cambridge stag do so special?

Cambridge, hallowed seat of learning, birthplace of comedy legends, stately halls of education and endeavour, protector of culture and knowledge... "Venimus, vidimus, nos biberunt" We came, we saw, we drank. Because despite its No1 preoccupation (sculpting inquisitive minds) Cambridge is a fantastic place to party. For years its been visited by the brilliant minds of students who know how to have a good time. That makes a Cambridge stag do something a little bit special and the perfect place for you and the boys to "educate" the groom-to-be as to the error of his ways.

Always look on the bright side of life… Richard Ayoade, Stephen Fry, Sacha Baron Cohen, the Monty Python team, Hugh Laurie, David Mitchell, Robert Webb, Andy Parsons, are just a some of the comedy minds that have helped shape Cambridge into a comedy hotspot for students and stags alike. Any Cambridge stag do can be assured of non-stop comedy. If not then quite frankly chaps you're doing it wrong.

As with most university cities there is a massive array of great bars, clubs and restaurants to suit every taste and budget, making Cambridge the perfect place for a stag party night out.

And along with all the spoken laughs at the groom's expense you'll find plenty of opportunity to point and laugh at him as well because a Cambridge stag offers a massive selection of stag activities and some great man challenges for you all to face.

To get a no hassle, no obligation quote you can contact our team today.

Educated Minds - Know the best things to do in Cambridge...

If you're looking for action while in Cambridge, we have a veritable library of the tried and tested as well we the weird and whacky to make sure you test the boys to their limits and create the sort of laughs that will be remembered for a lifetime.

This is the groom's last hurrah as a single man so should be nothing less than legendary, as the stag organiser and the man with the plan you can choose from a truly awesome array of activities to get his party started.

Diamond Snatch - You and the boys will train to become weapon wielding, door kicking diamond thieves. You'll plan your "job" and then go in for the big one. Everything will be captured on "CCTV" so you can get free copies of your raid after the event.

Mud Buggies - This is down and dirty fun. You'll be given charge of some serious mechanised hardware and then let loose to race each other through wet and dry terrain.

Check out our full list of Cambridge stag activities on offer.

If you're staying after class its when those Cambridge stag days turn into stag nights the hilarity kicks up a gear. Cambridge has a totally unique feel unlike virtually any other city in the UK. A really chilled vibe mixed with a buzz of energy that at any second could spiral into creativity and genius like madness… although for most students this usually just ends up another round of drinks and growing student loan so be prepared to step in with your own mad genius ideas. Cambridge is certainly the place for you and the boys to get hit with inspiration to make sure the groom gets a weekend and nights out with the guys he'll never forget.

Check out our Cambridge stag do nightlife to find your ideal weekend.

Cambridge - A brief history of the Cambridge stag weekend

Cambridge residents buy more take-aways than in any other city.

500 BC - The local celts and druids discover how to make alcohol, it instantly becomes a hit with mystic set who have secret nights away from their women folk, often hunting for stag.

55 BC - The Romans arrive and take boys nights out to a whole new level of bacchanalian debauchery by inviting the female servants and passing Britons to join them. Queen Boudicca isn't quite so impressed at seeing the Romans drunk and wearing horns on their heads as they run naked through the streets of "Duroliponte" so a massive ruck kicks off. The Romans win but soon realise the British weather is crap so they bugger off back to Rome.

700 AD - Having got bored with the folks back home being so boring Saxon's turn up on our shores bringing with them a frothy little mixture they call beer. They pour it down the necks of fellows the night before they get married to help them drown their sorrows.

875 AD - The Vikings arrive from Denmark and try the local brew, they decide it is probably the best lager in the world but resolve to make it better one day. In the meantime time they get down to some serious pillaging and the little town on the River Cam takes a battering as Olaf and the boys get a bit naughty. They also wear antlers on their helmets.

1068 AD - William the Conqueror arrives having beaten Harold in extra time at Hastings. He introduces wine to the good men of Cambridge but by and large it's considered a girl's drink so the local lads stick to beer.

1643 AD - Oliver Cromwell overthrows the King and years of terrible rule. He tries to reform the country in a mould he thinks God would most approve. He starts banning stuff like dancing, bear baiting, cock fighting, Christmas, mince pies but when he bans football and beer he finds the peasants are revolting. The King is returned to the throne and local boys come back to Cambridge for their nights out.

Modern Day - You and the boys show up. Despite Cambridge's colourful history you realise that someone needs to show the place how to really party!

*Please note for reasons of historical clarity we should point out that we might have made some/most of that up.