Bouncing beach parties, belting activities and big nights out, a Tenerife stag weekend is vying with the best as an ultimate destination for the groom's big send-off. Remove all the usual stag planning stress from your life with the help of the experts StagWeb!

Save time, hassle & money with StagWeb. Get your Tenerife stag do quote today 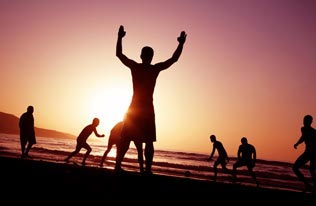 Tenerife has been a popular stag destination since time began. It has legendary status amongst stags who have made the journey for their send-off before. It’s time to take their word (and ours!) for it and get down to this party island for what’s guaranteed to be a wet and wild weekend.

In the South, you’ve got Las Veronicas to explore which boasts all the best nightlife destinations for party-ready stags. It packs out every night of the week in peak season with tourists from around the world who want a taste of that sweet Tenerife atmosphere.

If you’re staying up North, you’ll want to check out Santa Cruz for banging bars and clubs that’ll stay buzzing well into the early hours. 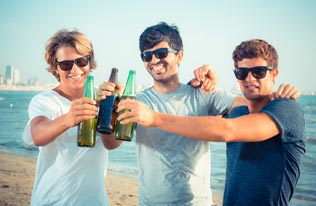 If it's golden beaches you're after on your Tenerife stag do, then it doesn't get better than El Medano which offers a great location for lads looking to top up their tans while trying their hands at a range of awesome watersports. For a vibrant nightlife, a visit to Playa de las Américas bars, pubs and clubs can impress even the most party-happy stags.

La Laguna Cathedral - It looks like something out of an Assassin's Creed game although you'll probably get a few concerned looks if you try to climb it.

Tenerife's flag is identical to Scotland's.
The island is a hotspot for UFO activity.
The Canarian word for potato is 'papa'.
Tenerife didn't have speed limits until 1974 (lucky).

A Taste of Tenerife

Eats - Turkey isn't enough for the locals in the festive season, instead they tuck into a 'Baifo', or as we'd call it in Blighty, a whole marinated goat. Could just be the perfect Tenerife stag do buffet?

Drinks - A pint worth shopping around for is the 'Dorada'. This beer is brewed exclusively in Tenerife and can't be found anywhere else in the world, you'll definitely miss it once you're home so enjoy it while it lasts!

On Ya Bike! Getting Around Tenerife

Tenerife features an extensive bus network that makes getting around the island very easy indeed. If you're planning on using the services, a travel card can give you easy access to all the routes at a cheaper price so you can save those euros for the bar.

Tenerife Stag Do - Reason to be Cheerful Pt 1

Any great stag do needs a few basic requirements; cold beer, epic adventures and great mates. All you need to do is bring the groom and his crew of eager playboys, everything is waiting for you on this fantastic Island. The Island is formed on volcanic rock and offers some amazing landscapes that form the backdrops of some of the fantastic stag activities unlike anything you’ll find back home (with the cold skies and warm beer).

The Price is Right!

One of the great advantages with Tenerife is the number of chartered flights heading out there each day, that means it is a lot cheaper than other European destinations. In fact at current rates it's cheaper to fly to Tenerife than fill your car with petrol. But that's not the only saving. At StagWeb our Tenerife stag do packages and weekends are designed to give you the maximum bang for your buck. Ready for the maths bit...?

StagWeb have built some amazing relationships with our Tenerife suppliers. Because we're able to send so many groups each year we get preferred rates which we pass on to you. "Why not just pocket the difference?" We're a company built on creating amazing weekends at great prices. Many of our groups say they'd book with us again, the simple economics is if we're provide great service our clients go away and tell their friends about us and/or come back and book again. Be the best and offering the best deals is what makes us tick (well that and our eternal hope that a team of cheerleaders will come and share our offices).

Tenerife Stag Weekend by Numbers - Reason to be Cheerful Pt 2

We don't just want to save you money (although we will) we always want to save you hassle. Booking your Tenerife stag do with StagWeb means you can instantly relax and look forward to a great weekend. We'll find the best hotels, the best deals, we'll take care of any special requests, we'll even take on some of the financial worries; with our individual online payment system all the stags can pay separately which is one less worry for you. We can even take care of all your transport from leaving your front door to arriving at your hotel or self-catering apartment so you can concentrate on planning some epic stag pranks.

Tenerife Knows How To Party

Tenerife stag dos really are spoilt for choice there is just so much partying to be done, whether it's around the pool and beach bars during the day or the incredible nightlife you'll have action in abundance to give the groom a 'loco despedida' (crazy farewell). The island is set up for us Brits with plenty of bars and restaurants catering to our tastes. But if you're looking to really immerse yourself in the culture while you're here then there are some great Spanish restaurants and plenty of fabulous Spanish beer to enjoy.

Proud to be the Best

It's not very British to strive to be the best, normally us Brits like the plucky underdog, we celebrate the mundane and have a great love of the colour beige... But at StagWeb we're proud to be the very best at what we do, to provide the biggest adventures, the wildest nightlife and the best customer service. Our Tenerife stag do packages and weekends leave no stone uncovered in making sure the groom gets the weekend he deserves. We'll leave it to you to make sure he gets home without any extra bruises/scars/tattoos ahead of the wedding photos.

Put us to the Test

If you don't believe us put us to the test, send us a quick enquiry or call our team today (01225 474200) to get your Tenerife stag weekend started. You'll receive a free, no obligation, no hassle quote within days, packed with action, laughs and great deals.