Expect the big, expect the bold, expect the brilliant if you're heading on a Zagreb stag weekend for the groom's mammoth send-off. This Croatian party city is perfectly equipped for your colossal celebration. Avoid the grueling stag planning stress with the help of StagWeb and guarantee a memorable weekend!

Get £75 off the groom's place and £75 off the lead organiser's place when you enquire in June. Simply add 'CROATIA150' to your enquiry form.
Groups sizes 15+, terms apply.

Save time, hassle & money with StagWeb. Get your Zagreb stag do quote today

A Guide To Your Zagreb Stag Weekend

Massive adrenaline pumping action or barrels of banter, Zagreb has it all. Get the lads out onto the Go Karting track for high octane, fast and furious competition or bundle into a boat for some wet and wild White Water Rafting. Answer the Call of Duty with epic Target Shooting or enjoy a laid back evening Wine Tasting. There's something for any stag here.

Croatia is the country that never stops giving when it comes to awesome hangouts! We recommend the epic party street of Tkalciceva where restaurant bars and cocktail joints are ten a penny. There are also covered courtyards to enjoy a tipple out of the sun in peak periods. Although it’s busy around these ends, there’s an exclusive, relaxed feel, perfect for a spot of evening drinking.

If you’re visiting in summer, be sure to check out the area around Lake Jarun where bars start to pop up and clubs are plentiful. It’s a short taxi ride away but well worth it for a unique drinking experience. For larger groups where taxiing isn’t an easy operation, sticking to the city centre will still give you a cracking night out amongst heaps of other party-ready tourists.


One oddly popular Zagreb attraction is the Museum of Broken Relationships. 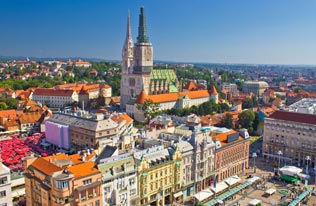 Tkalciceva Street in Upper Town is the ultimate place to start an epic stag night out. Boasting the city's highest concentration of cafes and bars, this is great for easing the boys into their awesome Croat evening. If you're after the nightclubs head to Lake Jarun for waterside clubbing or beach parties in the summer months.

Gornji grad, or Upper Town, is the historical centre of Zagreb and is home to the impressive Zagreb Cathedral. Not just an old church, Zagreb Cathedral is one of the tallest buildings in Croatia and its awesome spires can be seen from just about anywhere in the city.

The ballpoint pen was invented by Zagreb resident Slavoljub Penkala.
Zagreb boasts the site with the most Neanderthal Man remains in the world.
Croatia is made up of 1,000 islands.

A Taste of Zagreb

Drinks - The local poison which is a must-try on your big trip to Croatia is Rakia which stands tall between 40 and 60% (some suped-up versions can hit 90%, so be sure to go steady)!

Zagreb's public transport system is efficient, reliable and runs until 4am! Easy to use and covering every part of the city that a stag would want to see, Zagreb's tram line is great for daytime sightseeing or post night out transport alike.

Zagreb is an increasingly cycle friendly city too with a Boris Johnson inspired public bikes to get about the city with ease which are also a great way to work off those hangovers.

Why Choose Zagreb For a Stag Weekend?

Dubrovnik might be the city that gets all the sun worshippers and beach bums, but when it comes to year round quality stag weekends, Zagreb leaves it sitting in the shade. Zagreb’s earned its place as Croatia's capital city, sticking around since Roman times to become the cultural centre of the country and, as the only city in Croatia with a population of over 1 million, it’s the definitive centre of partying too.

Zagreb is a city that doesn't seem to have picked out particular identity to stick to when it comes to stag weekends, either - no wonder, when it's such a glorious and chaotic mishmash of identities.

The club and bar scene is exactly as diverse and varied. On one hand you have the backpackers and the gap year students stopping through on their European tours, as well as Zagreb's own student population, filling the pubs and bars with cheap beer and spirits. On the other, all of Croatia's biggest companies, banks, and media offices are in Zagreb, which means there are dozens of suave city slickers burning money in Zagreb's cooler contemporary bars and clubs. Add in the lakeside clubs too, and there's no chance the stag won't find somewhere in Zagreb that suits him down to the ground. You'll be spoilt for choice on your Zagreb stag do.

How Soon Do We Go?

In summer, everybody and their uncle will be heading south down Croatia to cities like Split and Dubrovnik - and that’s not just the tourists, it’s everyone in Zagreb too. We wouldn't head here at the height of summer then, since you'll be pretty much the only people in Croatia not at the beach. Any other time of year and you’re good though; Zagreb has a range of festivals and celebrations spanning all months, StagWeb's stag activities set to keep the lads busy all year round, and the nightlife options on a Zagreb stag do are guaranteed to keep you happy every day of every month of every season.

Unfortunately, airlines haven't caught on to Zagreb as a brilliant stag location as quickly as you have. Pretty much your only chance of a direct flight is from London Heathrow or Gatwick, where Croatian Airlines, BA, EasyJet and WizzAir all cover flights.

What Can StagWeb Do For You?

Aside from saving you money in clubs, hotels, and activities? We can make your whole Zagreb stag do experience easier. We don't want to impugn your organisational prowess here, but putting together a stag weekend with the lads can be hard work. It's not just trying to balance what everyone likes, what everyone hates, how much everyone's budget is, whether the stag actually doesn't want a stripper or whether he's just saying he doesn't in front of the bride-to-be... it's all the fiddly details too, like where you're staying and how you're getting around and which clubs are worth visiting, and where they are.

And that's the stuff we're best at. At StagWeb we’ve been helping gents put together epic stag dos since 2002. We can help however you need it, whether you want just one particular activity specially picked out to suit your stag, or a full, complete, predesigned package that means all you and the lads have to do is turn up at the airport (with passports).

Call us. There's no pressure, and no commitment; we'll just be able to tell you a bit more about Zagreb and what we offer, and if you like what you hear we can take it from there.