I'm Symon, StagWeb's Portsmouth Destination Specialist. Have a browse around or send me a quick enquiry now, or even call me on 01225 474217.

Build your Portsmouth stag do

Special Offers
from £25
Packages from £25

This naval city has been turning boys into men for centuries so a
Portsmouth stag weekend is the perfect place to give your groom a proper send off.

Plan your Portsmouth stag do

What they said about Portsmouth...

They made it so easy from the booking to paying and through to the actual event. Top quality activities at a reasonable price. We had a brilliant weekend. Thanks for everything

A Guide To Your Portsmouth Stag Weekend 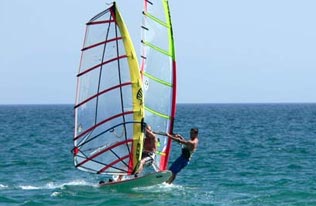 One of the UK's most important ports and a maritime history like nowhere else, Portsmouth is a top water sports destination. Expect plenty of wet and wild stag carnage as the boys hit the open waters with Power Boats, try their hands at Windsurfing or spend the day Deep Sea Fishing! There's enough action in Portsmouth to sink other stag destinations.

The Wine Vaults - Usually packed to the rafters, boasting over 50 craft beers and packing a lively atmosphere, this should be the stag's first stop ahead of a big night out in Pompey!

The Fleet - Low key and laid back, this atmospheric pub has one of the only beer gardens in Portsmouth and hosts a lively and popular night out every Wednesday.

Bar 38 - Overlooking the water and in the shadow of the iconic Spinnaker Tower, Bar 38 serves up a selection of epic cocktails to be enjoyed in the outside seating area.

August - Victorious Festival
With multiple tents and attractions to be seen so close to The Solent, this multi genre music festival has something for all the stags.

September - Southsea Fest
One of the best events on the South Coast, Southsea Fest has been showcasing Britain's up and coming musicians since 2005.

The Hard is the historical and cultural hub of this seaside city. Whether you've got a history buff stag in your ranks that want to check out the HMS Victory and Mary Rose or you all want to hit the many pubs and bars around the harbour, this is the place to be!

If you're after the best view in South England, Spinnaker Tower won't disappoint! Panoramic views of the city, the harbour, historic dockyard, the sea and surrounding areas are part of what makes this tower an epic, must see landmark. There's a glass floor section too, which is the ultimate stag bravery test.

Arnold Schwarzenegger lived and trained in Portsmouth for two years.
It’s estimated that up to 20,000 prostitutes worked at the port by the end of the 1700s.
Harry Redknapp was given the key to the city… He sold it and bought two strikers (or we might’ve made that last bit up).
It’s home to Britain’s most haunted house.
And the narrowest, just 170cm wide.
Sir Arthur Conan Doyle played for the club that would become Portsmouth FC. Shame he can’t solve the mystery of their Premier League status?.

A Taste of Portsmouth

Eats - Kassia - Amazingly this fantastic diner has taken the greatest food ever (Indian, obvs) and made it even better by turning it into tapas and serving it with cocktails. Perfect sharing grub for social guys at the start of a brilliant evening.
135 Havant Road, Portsmouth, PO6 2AA

Drinks - If it's a pint you're after you won't do much better than Brewhouse and Kitchen, a microbrewery and pub that serves an unbelievable array of beers. If none of the 45 beers available catch your eye, maybe the speciality 'Beertails' (beer cocktails) will!
26 Guildhall Walk, Portsmouth, PO1 2DD

On Ya Bike! Getting Around Portsmouth

If you're only looking to stay around the harbour, everything's easy enough to get to by foot. However, if you want to broaden your horizons and go further afield a number of bus routes run at reasonable prices, allowing easy access to any part of Portsmouth and beyond.

A guide to your Portsmouth stag do

Portsmouth really does stand out from the crowd as it's the UK's only island city, sitting pretty on the very edge of the south coast - walk any further and you'll be in the sea! Outside of London it's the most densely populated place in England, so you can be sure that plenty of native partygoers will be around to show you lads a good time. It's no wonder that Portsmouth is fast becoming the nation's premier waterfront choice, either - the island location means the Portsmouth locals have squeezed in everything they need on isle, from casinos and bars to clubs and pubs. This one city alone holds 7 working breweries - it's a city that takes its alcohol seriously, in a tradition started by the sailors and continued by the students. Its shipping and naval history bodes well for a top stag night too, as it's a cosmopolitan, multicultural city which has happily embraced the best of other cultures, which means some fantastic grub for you and the guys. And if you needed any more reasons to strap on your flippers and get swimming to Portsmouth, we've got just one word for you - beaches. If the promise of sand, sea and sunbathing beauties in bikinis isn't enough to get you diving in to Portsmouth Harbour and on to the island, then it might just have to be the plank for you!

When should you visit Portsmouth

Summer is the ideal time for a Portsmouth stag weekend. When the sun is out, the beaches fill up and are a great place to spend some time with the lads, making the most of the sea and sand. Portsmouth is home to some of the best water sports in the country, whether you want to enjoy a bit of white water ribbing or windsurfing. These are usually seasonal, so if you and the lads are desperate for diving in December, you might have to splash out on somewhere further afield of the UK. That said, there's still plenty to do in Portsmouth all year round, so as long as you don't have your heart set on tossing the stag overboard, there's no reason to skip a Portsmouth stag do at any time of year. There are festivals all year round, or if you fancy staving off frostbite, StagWeb offers plenty of indoor activities to keep you nice and warm!

Where should you stay in Portsmouth

Portsmouth is a tourist friendly city by day, so there are good quality hotels all over the city. If you're looking to be at the centre of Portsmouth nightlife though, you should head for Southsea, and the areas north of it - if you go south of Southsea, you'll end up somewhere in the region of France. It's the section of Portsmouth that houses the University, and consequently the best nightlife has developed around here to keep the students happy - as well as some of the cheapest, to accommodate those student budgets. If you want somewhere a bit quieter to retire in the evening, or would rather be nearer the day activities to cut down on transport time, there are plenty of options around the whole city for stags to stay in.

How do you get there?

'Seedy at times, grim in places, but colourful.' John Arlott

Well, start driving and head south. Keep going. At some point, you should hit water. Keep going a little bit further. That's Portsmouth. (We should mention that this only works if you come in a perfectly straight line from the right place. A little to the right or left and you'll just end up in the sea - or worse, on the Isle of Wight.)


If you'd rather take the train instead, Portsmouth has a few stations; Portsmouth Harbour or Portsmouth & Southsea are the biggest, and both have lines running to London, Brighton, Bath, Bristol and Southampton.

Why should you entrust your mates' money and all of your best man credentials to a team of experts rather than trying to go at it alone? Fair question. We've spent years perfecting Portsmouth stag dos, and we're pretty good at it, StagWeb have been planning Portsmouth stag weekends since 2002. With us, you're guaranteed the best activities and accommodation around, as well as access to the best nightlife Portsmouth has to offer. We're also fantastic value, our long-term partnerships with on island companies and businesses allow us to negotiate deals on your behalf that you couldn't manage alone. Just have a look at our packages to see what we can offer you. That includes your accommodation, activities, and epic nightlife. Give us a call and we'll get things in motion!