Wet and wild coastal action combined with a buzzing party scene, a Southampton stag weekend has everything needed for the ultimate send-off. Avoid all the stressful stag planning and make sure it's a weekend to remember with the help of the experts at StagWeb!

Save time, hassle & money with StagWeb. Get your Southampton stag do quote today 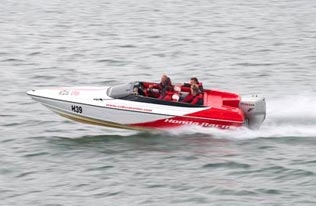 Seaside action is always going to be on top form in Southampton! Set the boys up with anything from Wind Surfing to a Jet Boat Thrill Ride to choose from you can guarantee the stag some wet and wild action on the South Coast. On dry land you've still got more choice than you can wrap your heads around, whether it's down and dirty Quadbike Trekking or hilarious Binocular Football, Southampton's got it all!

The Cultural Quarter of Southampton might sound like it’s packed with museums and galleries (which it is) but it’s also home to some brilliant bars, especially on Above Bar Street (the clue’s in the name, eyy?!). On a sunny evening, Guildhall Square will pack out for a guaranteed party vibe. Oxford Street is a brasserie-filled beaut and when canopies extend, stags descend. It’s a drinking destination of the classy variety that’ll suit any group on a summer stag do.

Down by the port, it’s pub central, which makes it prime stag territory! Dine on a pint or two on the outdoor seating with a sea breeze. There’s everything from gastropubs to old boy locals.


"The Gateway to the World"
- Southampton city motto.

Bedford Place by day is a throwback to a bygone era, by night however, it's host to some of Southampton's best bars and pubs, her liveliest crowds and the epic Junk club. Southampton's nightlife is brilliant, but it's at its best and brightest in Bedford Place.

With their return to the Premier League, a trip to Southampton's Saint Mary Stadium is essential for any football mad stag. Whether there's a game on or you want a tour of the stadium, this new ground is one of the best in the top flight.


On Ya Bike! Getting Around Southampton

With a city centre that's fairly spread out, walking Southampton is not always the best option depending on where you need to go. The city boasts a decent bus service with a number of affordable lines running every ten minutes that make getting around easy, saving your feet for the nightclubs in the process.

There's no two ways about it when it comes to Southampton stag do's this is a city that knows how to party. Everything seems to have been built on a mighty footprint, mighty adventures, huge activities and epic nights out.

From its earliest dawn the nation's premier naval city has seen nights out on a legendary scale, pirates, sailors, soldiers and showgirls have all shaped this city over the years.


What makes a Southampton stag the stuff of legend?

“Ahoy there mateys… there be booty ashore.” Okay so maybe you're not all salty sea dogs but historically speaking Southampton has been the haunt of party boys since Captain Blackbeard was strapping his victims to the front of canons before giving them a far flung burial at sea. Pirates and smugglers once used Southampton's pubs to make plans and conduct their dubious business. Later it was the merchant seamen and sailors who tested their land legs on the cobbled streets and castle archways. More recently it's the dancing girls and staff from visiting cruise ships that can be found hitting the clubs and bars.

Craig David, Coldplay, Howard Jones, Foxes all have their roots firmly planted in Southampton's music scene which forms a large part of the Southampton nightlife. Great clubs, bars, pubs and some top notch restaurants means you and the boys will be spoilt for choice.

As you'd expect from a city so steeped in naval history there's plenty of marine adventure on offer for a Southampton stag weekend; kayaking, sailing and ribbing make up just a small selection of some of the great activities.


If you prefer to keep things land based you can have a stab at go karting, paintball and a plethora of sporting challenges to give your stag a competitive edge.

How to arrange your weekend...

Organising a stag party can be a time consuming and thankless task. Trying to marry the perfect events and arrangements to suit your party to create an unforgettable Southampton stag do is no easy feat. That's where StagWeb can help.
If you want to find out about rates or build your perfect stag party then send us a quick enquiry and let us do the running around for you.

Why use StagWeb for your Southampton stag weekend?

You can see for yourself how previous parties have faired on their stag. Read reviews, but we're happy with our hit rate, 96% of stags and hens say they would book with us again.


Okay so you're good, but can you save us money?

Well we're glad you asked, yes we can. We've been arranging Southampton stag weekends since 2002, during that time we've built up an unparalleled network of the best stag hotels, activities and have access to the hottest clubs in town.

Our longevity in the area means we get exclusive rates we can pass on to you.

If a stag group books their own accommodation they will be booking as a single party and so will pay the normal rates. They've also got to find a hotel that caters to stag groups. Because we've sent so many stag groups to Southampton over the years we are very much preferred customers for the hotels and activities, we get priority preference so not only can we be assured of finding you availability but also the preferential rates we get we can pass on to you.

Why do you pass the savings on?

Ok so maybe on the front of it mathematically that doesn't look like it makes financial sense. We could take the exclusive rates we get offered and pocket the difference. But that's no good in the long game. If we give you the best Southampton stag do, helping you stretch your budget for maximum fun and madness then the next time you book a stag party you'll think of StagWeb.

Southampton FC might not currently be one of the leading lights of English football but is has had some great English players over the years including; Peter Shilton, Kevin Keegan, Alan Shearer, Matthew Le Tissier, Paul Gascoigne.

They've also produced some great young talent, and their youth development system is one of the healthiest in the UK and in recent years has produced, Theo Walcott, Adam Lallana, Jay Rodriguez, Darren “Sick-note” Anderton and Gareth Bale (whatever happened to him?).

The Great Plague reached Britain through ships docking at Southampton.

The world's oldest bowling green is in Southampton… Snore… Zzzzzz