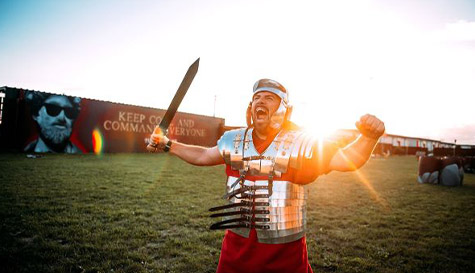 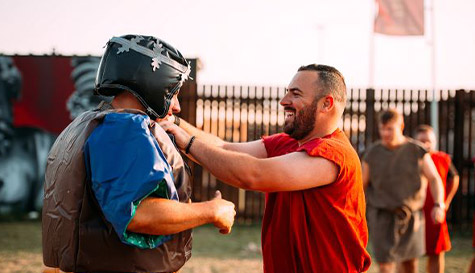 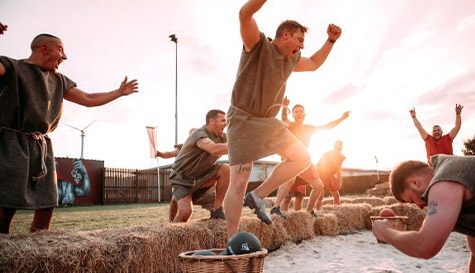 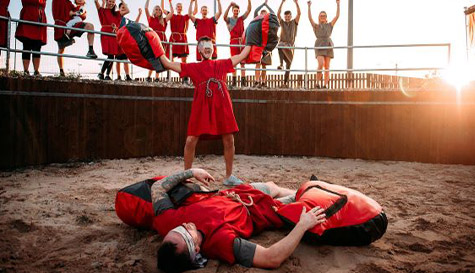 You and the guys have chosen the sunny shores of Spain as your stag do destination. Fair play. Why wouldn't you? Booze, beaches, the beautiful game - it has it all. The only thing missing is troops running around in togas, transforming from lowly plebs to heroic warriors! Fear not, fellas, with this stag do Gladiator Adventure in Barcelona, you can battle it out in eight hilarious Gladiator Games! You know what they say, when in Barcelona… do as the Romans do!

You'll arrive at the awesome purpose-built activity park where the year is 264BC and the peasants are fighting for their freedom to the entertainment of the crowds (they didn't have WiFi or Netlfix back then, remember, so cut them some slack!). Unfortunately, you were just going about minding your own business, up to your usual stag antics, when you were captured, imprisoned and condemned to death by the fearsome Emperor Sinbad!

Luckily, you've got a chance to regain your freedom. You'll be whipped into warrior shape at Gladiator School, and once you're fit for battle and ready to rise to the challenge, you will stop mucking about and take on the Emperor's eight hilarious, brilliantly bonkers Gladiator Games! May you have the strength of Spartacus, Spiculus and a herd of stags, as you simply must make it out of these games in one piece! Remember, 'What do we say to the God of Death?'… 'Not today!'

After an epic battle, you can grab a well-earnt pint from the onsite bar and retell your finest victories over a refreshing beer. There's also a Selfie Station where you can take some snaps of you and your fellow warriors in all your toga-wearing glory (yup, we know a Selfie Station may seem out of place, but technology advances very quickly!). Once you've treated the boys to an unforgettable day out, you'll head back to the city centre and party like it's, well, the twenty-first century, because you can't be doing without a big night on the town!

Book It!
Need more inspiration? Search all our stag do activities...
Enquire About gladiator adventure Now!

Please Note: We work with 1000s of suppliers across the UK & Europe so prices, availability, photos and specifics on our gladiator adventure activity may vary depending on your preferred location and dates.